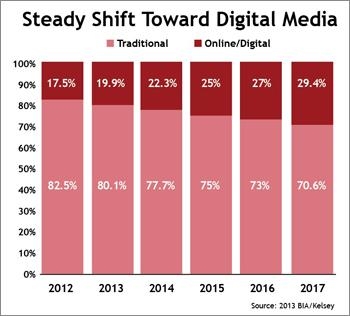 BIA/Kelsey defines local advertising as some form of targeted messaging to specific geographic markets spent by national and regional companies, as well as small and medium-sized businesses. It gathers proprietary and secondary information by segment, using third-party and public company reports to adjust forecasts during the year.

Mobile local ad spending is projected to grow especially fast, partly because it’s starting from a smaller base. That total will more than double from $1.4 billion to $2.9 billion in 2013 -- and will reach $4.4 billion in 2014 before hitting $10.8 billion in 2017, or a quarter of overall local digital ad revenue.

Local mobile advertising will account for 37% of total U.S. mobile ad spending this year, before increasing to 52% in 2017, according to the study.

After a 6% gain in 2013, BIA/Kelsey projects that local digital ad sales will jump almost 16% to $30.7 billion next year as a result of various factors, including a slightly improving U.S. economy, a more positive investor outlook, and the 2014 elections and Winter Olympics. The rollout of the Affordable Healthcare Act is also expected to generate higher local ad spending.

To highlight the inroads that digital will make in the local ad business, the report compared the proportion of dollars that online and traditional media will represent in 2017. Newspaper print, for example, will fall to 9.1% of spending, while online newspapers remain steady at 2.4%. Yellow Pages print will decline to 1.5%, while increasing to 1.9% on the digital side.

The gap between traditional radio and TV and their digital counterparts will remain wide, however. Terrestrial radio will see its share of spending fall slightly to 10.6% by 2017, while digital radio will claims just 0.5%. Spending on local over-the-air TV will also decline a bit to 14.6%, while dollars going to local TV Web sites will amount to 0.7%