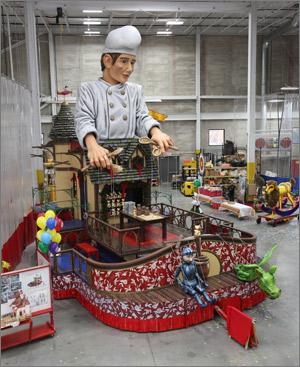 Lindt USA will this year join the lineup of floats in Macy's Thanksgiving Day Parade.

This year's floats were unveiled at a preview event this week at the Macy's Parade Studio in Moonachie, N.J.

Lindt's float features a chocolate shop theme, with a three-story-tall Lindt Master Chocolatier puppeteer figure pulling strings to orchestrate the pouring and casting of Lindt Bear and other chocolate figures for the holidays, making the puppets and spoons work in tandem.

In an early promotion this past summer, Lindt ran a "Christmas in July" contest.

Fans submitted photos and short descriptions of what the holidays mean to them on the brand's Facebook page, for a chance to win a trip for four to New York to watch the parade from the exclusive grandstand, and a shopping spree at the Lindt Chocolate Shop in New York.

Lindt selected five finalists, and its Facebook fans then voted to select the grand prize winner.

The 87th Annual Macy's Thanksgiving Day Parade will air nationwide on NBC-TV, from 9 a.m. to 12 p.m., in all time zones.