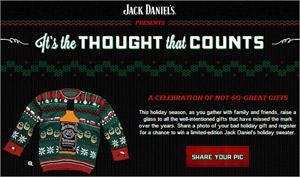 Good news for all whose closets are cluttered with misbegotten holiday gifts: Those eyesores can now be put to use.

Jack Daniel's, with its agency Arnold Worldwide, is running a digital/social contest called "It's the Thought that Counts." Fans are being encouraged to submit photos of the ugliest, most bizarre or just plain worst gifts they've ever received.

To enter, U.S. residents 21 or older need to visit JDHoliday.com and fill out an entry form, then upload their photos — tagged with #ItsTheThoughtThatCounts —  from their computers or by posting on Instagram or Twitter.

Entries are being accepted between Nov. 20 and Jan. 3. The photos will be displayed in a gallery on the JDHoliday site, where legal-age visitors will be able to vote on them between Dec. 16 and Jan. 3.

A panel of judges will choose the winners based on photos' creativity, uniqueness and total votes received.

Photos of those who submit the winning entries, wearing their JD sweaters, will be posted on social media.

The competition is already stiff.

Entries so far include a Chia Obama, a rubber-chicken purse, a banana protector, a sumo wrestler side table, a rooster lawn ornament and a plastic pork chop. (The submitter of the last item explains: "My uncle got me this plastic pork chop because he knows they're my favorite food. It might have been a decent gift for a dog.")

JD is running the worst-gift contest in addition to its now-annual holiday Barrel Tree campaign.

Each year since 2011, JD and Arnold have created a 26-foot, lighted Christmas tree out of whiskey barrels. 2011's tree was displayed in the brand's home town of Lynchburg, Tenn.; last year's was set up in London's Covent Garden district, with a temporary retail unit at its base.

The whiskey from the 140 barrels used to create each year's tree is bottled and sold in select markets as a limited-edition (only about 3,000 bottles) product, Holiday Select.

The Barrel Tree campaigns include 30- and 15-second holiday TV spots and other elements. This year's U.S. spots will begin airing on Black Friday.