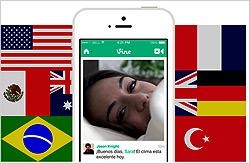 Vine says that in addition to making native versions of the Vine app, it is also working on tools that will help each country surface the videos made and shared by its countrymen.

This expansion into international markets comes on the heels of Vine's extension onto the Window Phone platform in recent weeks.

Vine was introduced by Twitter in January of this year and has proven to be the unrivaled hit app of the year. GlobalWebIndex declared last month that so far this year Vine has been far and away the fastest-growing app -- up 403% in the first three quarters of the year, although it still only hits 3% of all mobile users, or about 24 million users. By comparison, Instagram had an estimated 109 million users in GWI's survey.