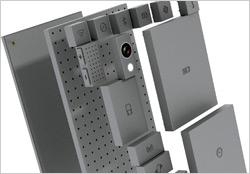 Google's Motorola Mobility has partnered with 3D Systems to advance a modular smartphone design it calls Project Ara. The project aims to create an open-source-hardware platform for smartphones where each module has a function.

Led by Google, Motorola introduced Project Ara. 3D Systems would enable the quick production of components and enclosures for the module system that snap onto the phone's body.

The modular smartphone will have the greatest impact on the component manufacturing industry, but the implications for marketing and ad targeting could become just as significant. The project creates an "open hardware platform" for creating modular smartphones. Google said it wants to do for hardware what the Android platform and other modular Web-based platforms did for software.

Shah said the project will enable markets to become creative--open the door to a module that makes the consumer's monthly subscription free in return for ads on their phone or allows it to collect data via a near field communication-enabled SIM card, he said.

While supporting marketing and advertising services was not among the considerations when Project Ara was conceived, a Motorola spokesperson said the open platform will allow third-party developers to create modules that could support these services.

The modular design would allow consumers to search for features and customize smartphones, upgrading as needed. For example, if the owner used cloud storage they could replace the storage module for a larger battery or a better camera. An open platform would allow consumers to choose the brands they want, support the brands they like and develop their own blocks. The modular design also would help reduce electronic waste.

Motorola has been working on Project Ara for more than a year. About a month ago, company execs met with Dave Hakkens, the creator of Phonebloks, an independent community of developers who want to create interchangeable phone components. The two companies are working on Project Ara. In a few months, Google's group will send invitations to developers to start creating modules for the Ara platform and could offer prizes for the best designs. The companies expect an alpha release of the Module Developer's Kit (MDK) sometime this winter.