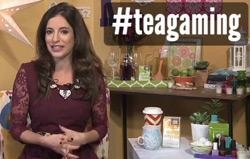 Starting nearly two years ago, Good Earth began researching how consumers think about tea, and actively involving them in all aspects of the rebranding, Corini reports.

"Our target audience continues to be predominantly women, but there are tea drinkers and potential tea drinkers out there who are very interested in bold teas and interesting new fusions that haven't been available in the marketplace," Corini says. "They do include Millennials, but they're more defined by a psychographic than by age – they have a bold, open perspective on life and a willingness to experiment with new experiences."

In addition to introducing two completely new varieties early this year (a chocolate and chili-flavored Cocoa Tango and a Sweetly Twisted fusion that combines tart and sweet flavors), the brand has remixed many of its favorite varieties to increase their flavor and intensity.

Those intriguing names are now spotlighted in dramatically changed packaging. Good Earth's former packaging was "much like [that of] the other brands out there," featuring a dark purple background and photo images of the key ingredients, notes Corini. The new packages have a white backdrop that speaks to the teas' all-natural (no artificial) ingredients, and they use bold, primary colors both for the now-larger names of the flavors and the now-illustrated ingredients images that accompany them.

The new design makes the brand "pop" amid the subdued packages of competitors on the shelf and spotlights the intense flavor profiles that are the teas' primary sales drivers, Corini explains. "We wanted people to experience the unique, untamed experience of Good Earth fusions on all sensory levels," including through their names and packaging, she says.

The revamped fusions and packaging have been rolling out at retail this fall, supported by a full roll-out of the new marketing strategy – each element of which emphasizes the "experiential" and adventurous nature of the teas.

The brand's redesigned www.goodearth.com site (where visitors can also purchase the teas), launched October 1. It features the same bold, primary colors as on the new packaging, along with shots of young women enjoying adventurous activities, and new engagement elements, including a "Mix Master" tool that lets visitors test out combinations of different Good Earth flavors to see how they work together.

"Our consumers are very digitally oriented, so the site is adaptive – it works well on any smartphone or screen," says Corini.

Indeed, Good Earth is now employing social media for most of its consumer communications, including daily postings and frequent polls – a shift from its traditional emphasis on print advertising plus (in recent years) some social, according to Corini. (The brand also uses some paid online advertising, and in-store promotional elements.)

For instance, the brand's Facebook page (and site) now offers a "Flavor Me This" app, in which users take a quiz about their style and personality traits to match themselves up with Good Earth fusions. When the app debuted this fall, Good Earth ran a sweepstakes in which fans who tried it earned chances to win free boxes of tea.

Krell stars in several videos on Good Earth's YouTube channel, offering fun recipes for hot and cold tea beverages and entertaining tips for "tea gaming" get-togethers with friends – events often positioned as social occasions to kick off a night of going out together, notes Corini.

Good Earth was a sponsor for the Nov. 17 "Hollywood Christmas" tree lighting/concert event at L.A.'s The Grove shopping and entertainment complex, during which Krell, as Good Earth's "lifestyle correspondent," interviewed and gave tea quizzes to the stars who performed, including Mary J. Blige and Toni Braxton. A video with clips from those interviews is on the brand's YouTube channel, and Good Earth will also garner exposure via the event's airing as a television Christmas special in markets throughout the country between Thanksgiving and Jan. 5.

In addition, on Nov. 27/Thanksgiving eve – the biggest going-out night of the year – Krell will host a Twitter party (#teagaming) during which participants will get answers to their fashion, style and party planning questions by tweeting her @jamiebkrell. [A still from Krell's Good Earth video promoting the Twitter party is shown above.]

During the fourth quarter, Good Earth is also implementing a new partnership with celebrity chef Elizabeth Falkner. She will develop original recipes using the new Good Earth fusions, which will be showcased in videos distributed through multiple channels.

As part of that partnership, the brand will run a sweepstakes offering consumers a chance to win an exclusive culinary experience with Falkner.

On another front, involving fans in creating sayings featured on Good Earth's tea tags is a standing tradition for the brand, and one that's become more important with its increased emphasis on direct connections with consumers, says Corini.

Each year, 25 original winning quotes are chosen from among many entries in the brand's "Tag You're It" contest. Some of the winning quotes now featured on Good Earth's tea tags include "Live all of your life like nothing is impossible," "Life is a river. Get wet," and "Be a blessing as often as you ask for one."

Good Earth began implementing some of its rebranding initiatives about a year ago (prior to this fall's full roll-out of the revamped fusions, packaging and new campaigns), including introducing the "Tea Untamed" messaging in social media and other communications.

Those initial efforts alone helped drive about 20% growth in the brand's Facebook fan base (which is currently showing nearly 61,000 "likes"); 10% growth in its Twitter followers (currently at about 3,500 followers); and more than 300% growth in overall organic impressions, reports Corini – who says that all of those metrics are expected to show more substantial growth now that the full brand makeover is underway.