eMarketer Ups Programmatic Projections Again, Will Reach $9B By 2017 In U.S.

Three months after revising its real-time bidding (RTB) projections, eMarketer is at it again -- this time saying advertisers will spend more than $9 billion on RTB by 2017.

The company admits that "advertisers are spending more than expected on real-time bidding," and that RTB is expected to account for a "significant share of all display ad spending in the U.S. this year and in the near future." 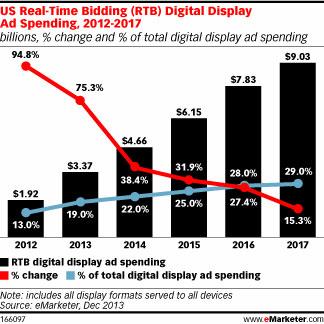 In the August update to their projections, eMarketer predicted the RTB space to account for $3.34 billion in 2013 and $8.69 billion by 2017. eMarketer writes that the projected uptick is due to an overall increase in all digital display advertising.

"Advertisers are clearly keen to take advantage of the cheaper pricing and targeting capabilities offered by RTB inventory, which is why we’re seeing such dramatic increases in adoption year over year," said Clark Fredricksen, vice president of eMarketer.

He added, "There’s also clear momentum behind programmatic advertising among buyers and publishers, though there are still a large number of companies testing the waters. As more of these buyers and sellers become comfortable with the programmatic process and continue to improve inventory quality, we expect to see RTB spending to continue to gain share in the display market."

eMarketer cites research firms Magna Global, JMP Securities, and International Data Corporation as having 2013 projections for RTB spend at $3.9 billion, $3.4 billion, and $3.1 billion, respectively. While the IDC has lower projections than eMarketer for 2013, they actually predict advertisers to spend $14.4 billion on RTB by 2017.