After all of the hype and shallow coolness, Apple’s Touch ID feature on the iPhone 5s has not proven to be my friend. Maybe I suffer from Muted Fingerprint Syndrome. But no matter how many times I re-enter my fingerprint with iOS 7, I suffer more false starts when opening my phone now than I did when I started using the feature over a month ago.

And soon I may be fumbling at checkout to get my iPhone to acknowledge me. In an enormous patent filing Apple submitted to the World Property Organization last week, it lays out its model for using a Touch ID-like model in combination with wireless check-in (i.e. iBeacon) for making the phone into a payment device. Not being one to rifle through 600-page patent docs, I will leave it to the folks at Apple Insider to describe. “The patent predicts a mobile, location-based payments system authenticated by a user's fingerprint,” writes Shane Cole. “A user is shown checking into a coffee house and authorizing a payment to that same business with their fingerprint, a feature many believe is in the works with Apple's iBeacon's microlocation technology as a complementary piece.”

Apart from the fingerprint authentication, the model is not new. PayPal has already deployed its own Bluetooth LE devices in some retail location tests. For users who have opted into the service and a specific store app, the device pings you at the door to allow a check-in. From there the merchant can see you are there and can charge your purchases easily to the PayPal account.

Surely no one thought that Apple invested millions in fingerprint recognition technology just so it could make passcodes easier. And those iBeacons are not just there to push more product info to your phone when you enter the lingerie section. As some of us argued months ago when Apple rolled out each of these pieces, there is clearly a master plan underway to get Apple much deeper into retail and the payments business. After all, these folks have hundreds of millions of our credit cards in the database. Tim Cook and co. would be guilty of corporate malfeasance if they didn’t figure out a way to leverage that financial connection and consumer trust offline. And whether real or imagined, I imagine a fingerprint ID model will feel a lot more secure and private to many consumers than would that magic NFC tap.

Interestingly, the massive patent filing also describes a much broader range of Touch ID functions that might be coming. The sensor may become embedded in the touchscreen itself. The ID button could be used as a controller/trackpad, where different positioning activated gestures like screen swipes. The ID can also be used to activate different user profiles on the same device and limit certain users from specific app access. A shared iPad, for instance, could use Touch ID to restrict the banking app to specific users.

Which is great if I just could get Touch ID to recognize the iPhone’s owner. Maybe I just have too light a touch. It may be genetic. I have heard it said about the men in my family. “You could barely tell he was holding my hand,” Grandma used to say about Grandpa. 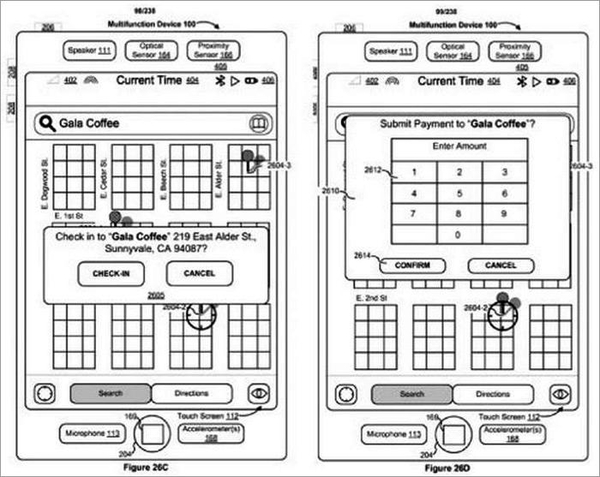