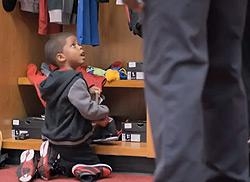 The National Basketball Association (NBA) and Foot Locker, which has been an NBA sponsor in various capacities for two decades, are extending their business partnership with a multi-year deal that makes Foot Locker official marketing partner of the league.

The sports retailer will continue as the title partner of the Foot Locker Three-Point Contest, where long shooters vie against each other between game periods. Foot Locker's activation includes “Kicks of All-Star” at branded sections of NBA.com. The section shows off the sneakers worn by NBA players during the All Star.

The chain will also advertise on NBA TV and NBA.com, and, through its "Kids Foot Locker" brand, will sponsor NBA Hoop Troop program at retail and with promotions.

The partners said, in a release, that NBA stars Carmelo Anthony, James Harden, Russell Westbrook, Chris Paul, Chris Bosh and Blake Griffin, who have been in Foot Locker campaigns hitherto, will continue with the brand with some new players joining the roster of player spokesmen. Foot Locker says it will also continue to activate against NBA All-Star, including the Foot Locker Three-Point Contest with POP elements. Stores will also have NBA player and legend appearances, and interactive basketball activities and promotions for fans, per a release on the relationship.

In Canada, the athletic retailer will have a presence at NBA events throughout the season and will do NBA-themed promotions in stores. Foot Locker will also support the NBA Canada Series, which features NBA pre-season games, and the NBA BIG Tour, an interactive fan event.

A spokesperson for the NBA says that, previously, the NBA and Foot Locker worked  on some specific programs and that for one of them, Foot Locker Three-Point Contest, Foot Locker has been title partner since 2004.

In addition to having a presence on NBA digital properties, Foot Locker will run advertising during national NBA games on ESPN and TNT, per the spokesperson. She also says deals with individual players like Carmelo Anthony and Chris Paul are through the players' organization, but that the NBA partnership lets Foot Locker integrate such NBA marks as logos, team uniforms, and game footage into its campaigns with these players.