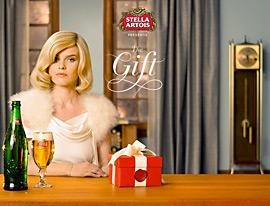 Stella Artois is conducting an online and mobile campaign dubbed “The Gift,” which tests the altruistic nature of participants.

The beer company began sending secret gifts to thousands of Facebook users, ages 21 and older, who upon receipt have a short time to decide whether to keep the gift for themselves or share it with another.

If participants continue to give rather than receive, they will create chains and Stella Artois will honor the choice by making a 10 cent donation to Water.org for each gift passed, up to $100,000.

Participants in the longest chain will be eligible for a special Stella Artois Crystal Chalice.

“And eventually Stella Artois became so popular it became available year-round and the world over,” Oleshak says in a release. “This program is a response to that -- a holiday thanks to our fans, and a chance to demonstrate the notion that ‘it is better to give than receive’ is alive and well.”

Participants can register at stellaartois.com/thegift by signing in with their Facebook profiles. All participants will have a short window of time to decide whether to keep the gift or pass to a friend and subsequently donate to a deserving charity, during a time of year built around generosity.

This is not the first time the brand has leveraged unique digital content for the holidays. Last year the brand utilized Google Street View technology to digitally send actress Alice Eve door to door, singing a holiday carol.

Founded by Matt Damon and Gary White, Water.org is a nonprofit organization that has transformed millions of lives in Africa, South Asia, Central America and the Caribbean by providing access to safe water and sanitation. Stella Artois has partnered with Water.org to be the beneficiary of this holiday campaign.