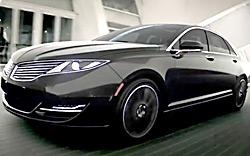 Lincoln, Ford Motor's luxury division, is rolling out a new vehicle next spring -- the 2015 model small premium utility called MKC. The crossover, which goes on sale next year, is emblematic of where the brand is going and the younger, more gender-balanced consumers it would like to invite along for the ride. The car will join the five vehicles (MKZ, MKX, MKT, MKS and Navigator) in the portfolio today, and is one of four new Lincoln vehicles the company will have introduced by 2016.

Scott Tobin, head of Lincoln product development, spoke about the brand at an International Motor Press Association lunch on Tuesday. His challenges are great: the near and entry-luxury car market is already as packed as a can of fish roe, and getting even more crowded with Hyundai and even Kia moving up market, while Mercedes-Benz, BMW, Audi and Cadillac have introduced so-called "gateway" vehicles at a lower price. And non-luxury brands offering luxury amenities on mass market cars and trucks are also impinging on traditional premium nameplates.

Tobin said there's no single answer to creating elbow room in the segment. "The appeal has to be lots of little surprises. It's a big job, and we are rational. We know who we are and how good the competition is."

He said the company is trying to hit "emotional chords" with new designs and engineering demonstrated by vehicles like the redesigned MKZ sedan, which has features that Tobin says embody Lincoln experiences that comprise "a series of pleasant surprises and delights."

That is best embodied in Lincoln Black Label, both a vehicle option series and a suite of premium retail and customer-service experiences. At the Pebble Beach Concours in August, Ford's EVP of global marketing, Jim Farley, said the program evinces Lincoln brand's “three foundational elements — design, quality and personal service." Tobin said Black Label will be available across the lineup starting next year.

The company also has aspirations in China, and Tobin said it's a good plan because the brand itself is aspirational there. "In China, it's a very prestigious brand. It's viewed as 'presidential.' We just have to get product in front of people and not be defined by the 'black car' business."

Lincoln also needs a flagship vehicle that makes the ultimate statement about the brand. Today it has neither a flagship nor a halo car — typically a high-performance sports car. Tobin says the company will ignore the latter for now. "They don't move the brand," he said. "So first we have to get volume segments filled, with the small premium utility and sedans and then get to a flagship product."

The other effort, he said, has been toward optimizing the dealer mix so that dealers aren't competing with each other or struggling in non-performing or non-critical markets. "It's been a cooperative process that has been all about getting those dealers into the right markets, in the right numbers, and locations to get that throughput," he said.

The company, by definition, has to grab buyers from other brands to get a new generation of drivers into its cars. Tobin said the top conquest vehicle is MKZ by a factor of ten and grabbing mostly from Lexus and Cadillac.