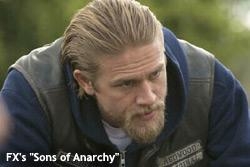 I waited a week to write this column, hoping that when I calmed down, talked it out with other critics and tried to think it through and make sense of it I might feel different.

No such luck. I'm still revolted by the climactic sequence in last week’s season finale of FX’s “Sons of Anarchy.”

Worse than being put off, though, is the realization that the direction series writer and creator Kurt Sutter took the show in during those crucial final moments may have killed any interest I had in sticking with it. That’s because he did something that he had been telegraphing throughout the season, and rather than throw in a startling twist or turn at the last minute and make us all sit back and go “whoa,” he did exactly what we expected him to do -- albeit with a burst of super-brutal violence that was vicious even by this show’s extreme standards.

Instead of sitting back and going “whoa,” it seems many people sat forward and said “bleach!”

If you are a fan of “Sons of Anarchy” and have not seen the season finale and have somehow managed to avoid the explosion of blistering blog entries that followed, you had best stop reading. I’m tempted to offer a reverse spoiler alert here: If you are a fan and you don’t know what happened, it might be best to read on and avoid actually watching the episode, which was one of the least satisfying in the history of the show and might turn you off as much as it did me. Also, if it’s still sitting on your DVR, trust me when I say it isn’t something you’ll want to watch during the holiday season.

Here are the grisly details: Toward the end of an almost two-hour episode, the first half of which was deadly dull, grotesque granny Gemma misunderstood what was happening around her, lost her shiz and killed poor befuddled Tara. Actually killed is too light a word. Gemma destroyed her, subjecting Tara to a near-drowning before repeatedly stabbing her in the head with a meat fork.

If Tara had to die, wouldn’t a quick bullet to the brain have been enough? Why so disturbing an end for a character that from my perspective was very necessary to keep some sense of balance in this otherwise unhinged drama?

I did not see every moment of Tara’s brutal demise, because I turned away for much of it. With age has come the wisdom not to take in things I might then wish I could un-see. But I knew what was happening, and it has since been described to me in great detail by a number of people -- many of them fans, and not one of them happy about what they saw. It was simply too awful.

Actually, five characters were destroyed all at once: Poor desperate Tara, earnest police chief Roosevelt (who was also murdered), dimwitted Juice (who shot Roosevelt), psycho Gemma (who was suddenly reduced to a one-dimensional lunatic monster not unlike Leatherface in the “Texas Chainsaw Massacre” movies or Jason in the “Friday the 13th” flicks, and most of all club-leader Jax, a gutless wonder if ever there was one. More than any other character on the canvas, he brought all of this on, simply because he hasn’t the stones to stand up to his mother. (Why he lets Gemma anywhere near his two little boys after she once got high, loaded the kids into her car, drove off and then lost control of the vehicle is anyone’s guess.)

An aside: I may not like the direction the narrative took, but I thought it was extremely well acted by all, especially Charlie Hunnam as Jax, Maggie Siff as Tara (how the show is going to miss her!) and especially Katey Sagal as Gemma. (Why, just last week in this column I suggested that she would have been a deserving nominee in this year’s SAG Awards.)

Tara had been a real screw-up this season, stressed beyond all reason by the lingering threat of eventual incarceration (having to do with another storyline from the previous season) and driven to a number of bizarre moves, like aligning herself with her older son’s birth mother, a hopeless drug addict; staging a not-very-convincing fake pregnancy and miscarriage (meant to look like Gemma’s doing), and making a deal with the feds for witness protection and then bailing at the last minute. But as exasperating as she was, Tara with her perpetual bad decisions became increasingly interesting to watch. “Sons” has always been full of crazy surprises, and I fully expected the show to do something with her that I never would have imagined.

Not even close, except for the meat fork part.

If memory serves, Tara through the years had been kidnapped, repeatedly threatened and terrorized, forced to endure the kidnapping of one of her children, grievously injured (resulting in the loss of her career), arrested and imprisoned, and perhaps worst of all, lied to by her husband, whom she memorably walked in on while he was having sex with another woman just a few episodes ago. Tara’s strength in coping with these challenges was admirable, but where did it get her? In the final moments of her life she was brutalized and slaughtered by a woman who had previously threatened to end her -- a woman Tara knew had an irrational obsession with her two little boys and would likely claim them as her own if anything happened to her and Jax.

That was Tara’s final reward for suffering so many awful experiences simply because she fell in love with the wrong guy. As far as I can tell, her only other crimes were getting an education, working hard to build a career in which she helped others and saved lives, remaining loyal to her friends and being a loving mother who tried to protect her kids. At the last, hers was not a storyline that merited six years of my time as a viewer.

I can’t help but wonder how I would be feeling right now if Tara had killed Gemma in their final confrontation. I should think that would have upended the show in an exciting way and left me counting the months until its seventh and reportedly final season.

So what happens now? That’s the biggest problem “Sons” faces as it careens toward its last blast. What can Sutter and company possibly offer that will maintain my interest after so shattering an experience? Gemma is now nothing more than a terrible murderous creature. (Why do I get the feeling she’ll be the last character standing when the whole thing is over?) Jax is wholly beyond redemption. I simply don’t care what happens to him. Actually, I don’t care what happens to any of them at this point, though I would like to see Jax or somebody punished for the club’s involvement in the school shooting that opened the last season. (Right now that just feels like a fast-fading plot point.)

Last week’s bloodbath of an episode was the series’ most-watched season finale to date, with almost 6.5 million viewers on the night of its premiere. I wonder what percentage of that audience was as put-off as me?