Candy Crush Crushes Other Apps In 2013 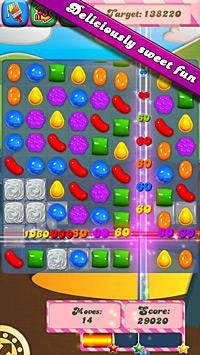 Candy Crush Saga wound up atop the ranking of top-grossing apps in 2013 on both the iPhone and iPad -- perhaps not surprising to anyone caught up in getting to the next level of the addictive free-to-play game.

The hugely popular title from developer King was also the top free iOS app this year, according to Apple’s annual “Best Of” list of top apps in different categories in the App Store.

Last month, King said Candy Crush Saga had been installed over half a billion times on both Facebook and mobile devices, with over 150 billion individual games played. Back in March it blew past FarmVille 2 as the most popular game on Facebook, with an average of 46 million monthly users.

U.K.-based King has been widely rumored to be preparing for an IPO, based on the runaway success of its hit game. However, a recent Telegraph report suggests the company is pushing those plans back until next year for fear of being seen as too much of a one-hit wonder.

Games accounted for nine of the 10 top-grossing iPhone apps this year, with Clash of Clans, The Simpsons Tapped Out and Marvel War of Heroes among the other titles. Online radio service Pandora was the only non-game app in the top 10. MLB’s At Bat app was the highest-grossing sports app, and the only sports title to make it among top 100 highest-grossing apps.

Among free titles, YouTube was runner-up to Candy Crush Saga, with Temple Run 2, Vine and Google Maps rounding out the top five. Right behind them were a trio of messaging and social networking apps -- Snapchat, Instagram and Facebook.

Minecraft-Pocket Edition, priced at $6.99, was No. 1 among paid iPhone apps, followed by other games including Heads Up!, Temple Run: Oz, Angry Birds Star Wars and Plague Inc.

Beyond the rankings, Apple also highlighted its own picks for best apps of 2013. App of the Year went to Duolingo, a “fantastically well-designed” tool for learning a new language through dozens of mini-games. Runners-up were VSCO Cam, a photo and video app, and educational title Endless Alphabet.

The Apple year-end app lists come a day after Nielsen released its own list of the top 10 smartphone apps of 2013 across iOS and Android, based on average monthly unique visitors from January through October. Facebook led the way with more than 103 million monthly visitors, but rival Google owned the rest of the top five with Search, Google Play, YouTube and Google Maps