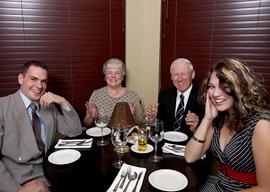 After several tough recessionary years, the U.S. restaurant industry has seen modest growth for the past few years — and assuming continued (if slow) economic improvement, the industry's second-half 2013 momentum should continue into 2014.

While the National Restaurant Association (NRA) has not yet released its 2014 industry forecast, Mintel estimates that 2013 restaurant/foodservice industry sales will total $438 billion, and that sales will increase by a healthy 5.9% in 2014.

The U.S. Census Bureau's preliminary estimates for food services and drinking places through 2013's first 11 months put sales at $504.9 billion, up 4% versus the same period in 2012.

In October, the Bureau's preliminary figures showed the industry's (seasonally adjusted) sales at $46.3 billion — up a full percentage point versus September's $45.9 billion, and about $200 million above the industry's previous monthly record high of $46.1 billion, which was recorded in April 2013. (While sales declined in May and June, October marked the fourth consecutive month of gains, with combined sales over those four months up more than $800,000 million.)

At the start of 2013, NRA projected that restaurant/foodservice sales would reach a record high of $660.5 billion, for a 3.8% increase in 2012 dollars, or a 0.8% increase adjusted for inflation.

The industry has been benefitting from some improvement in employment, as well as lower gas prices (particularly in October), although NRA chief economist Bruce Grundy recently stressed that its actual growth in the months ahead will continue to be heavily dependent on steady gains in income and jobs.

Economics and sales forecasts aside, Mintel category manager Julia Gallo-Torres sees five trends as being particularly key for the restaurant/foodservice industry in 2014:

*Fast casual's momentum continues. The fast casual format's impressive growth — which has been driven by consumers' willingness to pay more (despite continued price-consciousness) for healthier and better-quality offerings — is expected to enjoy continued momentum, thanks in part to a "slew" of new concepts focusing on customization, speed of service and convenience, reports Gallo-Torres.

These include higher-quality burger chains; concepts more firmly focused on health; and a growing number of pizza restaurants that can deliver a fully-cooked, customized pizza in a matter of minutes.

*Premium proves practical. Full-service concepts are adopting fast casual practices to boost their own performance. For example, several full-service brands are testing or have launched concepts that employ the speedier fast casual service model (particularly important during the lunch rush, notes Gallo-Torres). Other tactics include launching healthier, more flavorful menu items and employing technology to speed up the dining experience.

*Open-book business practices. Consumers are increasingly demanding transparency not only in restaurants' ingredient sourcing (and treatment of animals in the supply chain), but in general business practices, including employee policies and treatment. "Consumers are interested in patronizing restaurants and buying brands that reflect their own values," observes Gallo-Torres. "Concepts that understand this and offer more information about their green practices or the causes they support stand to reap the rewards of increased loyalty."

*Due demographic diligence. While restaurant operators' "obsession" with Millennials is understandable, given that Millennials are the most likely to dine out in nearly every restaurant segment, other demographics also represent important opportunities, stresses Gallo-Torres.

Specifically, serving the rapidly expanding Hispanic population (whose spending power is projected to reach nearly $1.7 trillion by 2017) is critical to restaurants' growth in the years ahead. Moreover, Hispanics tend to dine out in larger groups, she points out.

Women visit restaurants less frequently than men, which likely reflects women being more health- and budget-conscious. This points to opportunities for restaurants to attract more business from women by focusing on pricing, atmosphere and menu offerings, notes Gallo-Torres.

She also points out that while Baby Boomers enjoy dining out and have more disposable income than other demographics, few restaurant marketing campaigns have specifically targeted this demographic.

In addition, brands are redesigning their Web sites to allow consumers to access  information (and order) with as few clicks as possible, and to be user-friendly across smartphones and other mobile devices.

The five items with the highest points as "perennial trends" were fried chicken, Italian cuisine, frying, barbecue and eggs Benedict.