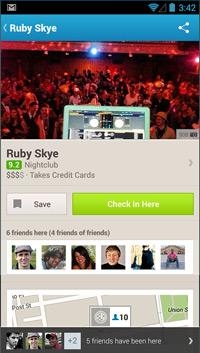 Foursquare on Thursday announced landing another $35 million in a fourth-round funding led by DFJ Growth, Barry Schuler’s investment vehicle. That brings the total in venture backing raised by the company behind the social location app to $106 million.

The latest financing, which also included Capital Group’s Smallcap World Fund, values New York-based Foursquare at just over $600 million, according to a Bloomberg report, citing a source with direct knowledge of the matter.

The deal caps off a year in which Foursquare ramped up advertising with the launch of its self-serve ad platform for small businesses in the U.S. and globally. The ads appear in a user’s feed or in relevant search results using the Explore feature in the Foursquare app, which now has 45 million users, according to a blog post today by CEO Dennis Crowley.

With the expansion of its ad offerings this year, Foursquare is expected to take in more than the paltry $2 million in revenue it posted in 2012. A Fast Company article this summer indicated that Foursquare was on track to bring in $15 to $20 million in 2013, based on information from one of its investors.

Still, one investor, Fred Wilson of Union Square Ventures, publicly chided Foursquare earlier this year for not doing enough to change the perception of the app as more than check-in service. Over the last couple years, Foursquare has tried to deemphasize the gaming aspect of check-ins by adding features focused on of local recommendations and discovery.

In the summer, for example, it rolled out “real-time recommendations” for Android users, notifying users about a cool venue nearby or items of interest at a specific restaurant or other place based on their current location. The feature more recently has been extended to the iOS 7 version of the app.

“It’s one of the reasons we started Foursquare almost five years ago. And it’s one of the special things that only Foursquare can do,” stated Crowley, noting that the recommendations are powered by data from 5 billion check-ins and 40 million tips.

Crowley didn’t specify how the company planned to invest the latest capital infusion, but said it will enable Foursquare to “build our vision even faster.” In connection with the fund, he noted that Schuler, managing director of DFJ Growth and former CEO of AOL, will join the company’s board.