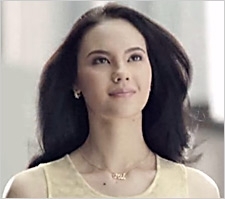 Just weeks after launching in the Philippines, a Pantene ad that challenges sexist labels in the workplace has gone mainstream, with Procter & Gamble announcing that it will introduce the campaign in the U.S.

Besides airing the spot, “Be Strong and Shine,” on network TV, it says it is kicking off a global #ShineStrong campaign, asking women to share their “Shine Strong” moments on social media through mid-January. P&G says it will reward five winners with a trip to a major women’s leadership summit.

The spot uses type to contrast the difference between the way people view men and women at work: Boss vs. bossy, or persuasive vs. pushy. It ends with the tagline, “Don’t let labels hold you back.” The video has already gotten some 8 million views, including a mighty shove from Facebook COO Sheryl (Lean In) Sandberg. And it’s resonating in a category where consumers clamor for feel-good messages. Dove has garnered tens of millions of views with its “Campaign for Real Beauty” videos since their kickoff in 2005, including this year’s smash “Real Beauty Sketches,” with more than 64 million views.

But not everyone likes it, and the company has gotten blasted for hypocrisy by many viewers and consumers, irked that it would idealize a great head o’ hair amid such a serious message.

“All this ‘you go, girl’ bullshit coming from companies that 99% of the time go out of their way to make women feel like shit so they buy more product is actually really off-putting,” says one poster on Reddit. “I prefer it when they're at least straight-forward about their intentions.”

“Companies like Pantene and Dove (owned by the same people who do the oh-so-female-empowering Axe commercials) spend the majority of their time making women feel inadequate as a way to sell their products,” adds another.

Bloggers, too, have sunk their teeth into the message. “According to Pantene, sexism is real (but they won’t call it that), but you shouldn’t let it hold you back,” writes Feministing blogger Chloe. “With Pantene, you can ‘be strong’ in the face of sexism (again, let’s please not call it that) and ‘shine’ because the revolution can’t happen unless your hair is glossy. Pantene wants to empower women, and if they happen to turn a profit while doing so, well, that’s because they don’t let the label of ‘multinational corporation minting women’s insecurities into gold while asking for credit for being so forward-thinking’ hold them back.”

P&G, meanwhile, says it is “pleased that this powerful video and our #ShineStrong campaign has provoked discussion and encouraged debate,” in its release, adding that “promoting awareness of gender labels is important to the Pantene brand.”

And some critics like the ad, explaining its presence on women’s Facebook walls everywhere. “Ultimately, I'm glad for the ad,” writes one of the Redditors. “Even if these companies usually profit from female degradation and are simply capitalizing on the ‘feminist movement’ to sell more product, they are at the very least providing a vehicle for thoughtful consideration of the issues of beauty and equality.”