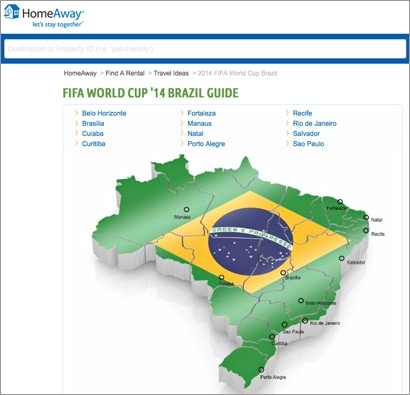 The World Cup may be six months away, but it's not too soon to begin helping fans figure out their trips and itineraries if they want to attend.

HomeAway, an online marketplace for the vacation rental industry, has released its FIFA World Cup ’14 Brazil Guide to provide an overview of the cities, venues and options for the entire tournament.

“One of the things we've seen is that when people book vacation rentals, they book them 100 days ahead of time. When you have a big event like this, the selection heats up pretty quick,” Jon Gray, SVP of HomeAway, tells Marketing Daily. “The further they travel the bigger the window. We think we're coming into the sweet spot for people to be thinking about the World Cup for Brazil.”

Indeed, the site has seen a 41% increase in searches for stays in Brazil since the pods and schedules were confirmed a few weeks ago. The recently released guide includes background on each of the 12 venues and host cities for the tournament, available vacation rentals in each location and interesting activities and food, along with the latest World Cup news.

“HomeAway is about bringing groups and families together to travel,” Gray says. “About 30% do so around some sporting event. We think it's true to our brand to provide people with lots of information about an event.”

The guide is intended to be a one-stop shop for people planning their trip to the World Cup this summer. It's broken out by destination and then game schedule so people can plan on knowing where and when they can see their favorite teams.

“It can help you plan your schedule, and you can do it on one place rather than going to a lot of sites to pull it all together,” Gray says.

The site has done guides for other events in the past, but Gray says this “is the best we've done so far,” leaning on a team that already exists in Brazil to put the guide together. The company also took extra care because they'll be using the guide as a basis for one they create for the 2016 Olympics in Rio.

“It will be a destination for 2016, though we'll probably go a bit more granular on Rio [for that],” Gray says.