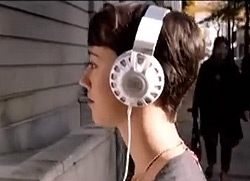 For some, headphones are a fashion statement. For JBL, they’re about listening to music.

In a new television ad from The Via Agency in Portland, Maine, the high-end audio products marketer stresses the superior sound quality, rather than the possibility of getting the headphones in several different styles.

“JBL is the perfect challenger brand in that they really have a belief in their products’ technology,” Via chief creative officer Greg Smith tells Marketing Daily. “One way to [show] that is to take on the biggest player head on and say what your beliefs are.”

In the commercial, a man and a woman walk down streets separately listening to their white and black JBL headphones, eying all of the people with stylish, neon-colored headphones hanging around their neck. “We were going to offer neon, but we thought the loudest part of your headphones shouldn’t be the color,” says a voice over. “We could have slapped on a celebrity endorsement, but we decided to march to a different beat.” At the end of the spot, the two JBL-wearers pass each other with a knowing nod, as the announcer says, “Hear the truth.”

The tactic is an indirect swipe at Beats by Dr. Dre, which have gained cachet in the marketplace as a style accessory, Smith admits. “We didn’t want to say Beats sound was overrated,” he says.” “We wanted to say what the company believes, which is Beats is largely style, where JBL is largely substance.”

Though younger consumers might be swayed by Beats’ marketing power and celebrity endorsements, the JBL spot is targeted at a slightly older crowd (22-35 year olds), who might be looking to stray from the pack a bit more, Smith says. “[That] market is more confident in the decisions they make and want to be seen as an individual,” Smith says. “JBL has a huge opportunity to reach them.”