Social Media Success Is Not (Just) About Cats 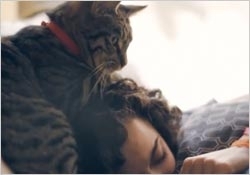 If anyone knows about using or misusing social media as a marketing vehicle, it's probably someone at BuzzFeed. The media channel, in its annual webinar this month under the aegis of its BuzzFeed University on content creation and social advertising, came up with — what else? — a list. It is, specifically, a 13-point lineup of what works and what doesn't, and why.

We won't go through all 13, which would be bad luck, because one of those points is about how hot the actor Ryan Gosling evidently is, and another is about cats (no, seriously). And cats just aren’t the right fit for some ad campaigns. But thanks for auditioning.

A couple of major takeaways: YouTube is today's broadcast model, and social video is cheap, so you can't lose too much by taking a risk (except maybe your reputation, but failure is not having tried, as they say.) The other biggie is around the concept of network versus broadcasting. If a celebrity who has a huge presence, millions of followers, talks about her day, it will certainly get retweeted, but that fame bubble will end precisely at the limits of his/her fan base. Because no one beyond that will care about her day, her life, or latest idea he or she has about, oh, cats. That would be the broadcast model.

If one, however, were talking about content meaningful to people, to the general population, that would be the network model, and that's what brands should be doing on BuzzFeed, says Jen Wolosoff, BuzzFeed's director of partner education and development. "It's creating content that people want to share, and not just by people who are fans of the brand. If you want people to connect with your brand, then go beyond your brand and your products."

Wolosoff explains that another lesson to take home is that mobile is the first screen. "We are more likely to lose our wallets than our phones," she said. "People spend more time on mobile than desktop. So, in order for brands to matter, brands need to be mobile."

Wolosoff tells Marketing Daily that 50% of BuzzFeed’s readership today is accessing via mobile and 60% of them are 18-34. "On average, people spend almost 2.5 hours on mobile. And share rates on mobile are double that of desktop."

Okay, just one thing about the power of cats, but it's really about the power of video. BuzzFeed just completed a video-based campaign for Purina's Tidy Cats featuring a cat that does cute things, while commenting circumspectly on the absurdity of human existence. Wolosoff says it got a million views in its first 24 hours. BuzzFeed hosted between 500 and 600 ad campaigns this year across categories, she says.

"It's important to tie back to brand aspiration as a core value," she says. "What does that brand stand for. Companies are thinking more about what is behind their brands, and how people can connect to that. So Starbucks coffee is great, but what does that brand stand for? They are successful partly because they have created social experiences beyond coffee. On BuzzFeed, it's connecting to brands in more emotional way."

BuzzFeed is including pure news in its content starting this year, with a bigger expansion planned for 2014. "News is increasing, and brands like that; it's a one-stop shop for content. And we are seeing an increase in video for sure," says Wolosoff. "Brands are understanding that it has become the preferred content, and also how fast it is to produce, and much less expensive than TV." She says the site's EVP of video, Ze Frank, has produced some 900 videos in 2013.