Yes Virginia, There Is Still Santa Claus -- And He Was Up 3% This Year 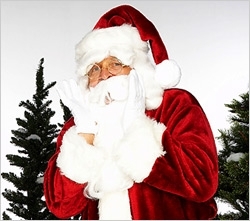 There may not be reason for great cheer at retail this holiday. The shorter shopping season seems to have eroded growth. ComScore reported yesterday that desktop-based online commerce was up only 10% year over year ($42.8 billion), even though the company was expecting more. Company chairman Gian Fulgoni said in a statement a flurry of last-minute online ordering was anticipated to make up for the compressed holiday calendar. “Unfortunately, that was not in the cards, as the final online shopping week saw considerably softer sales than anticipated, including zero billion dollar spending days – although Monday and Tuesday came close.” We report on the comScore finding in greater detail elsewhere at Mediapost today.

Mobile figures are absent from the initial report, which only accounts for the desktop. All other indications suggest a considerable migration of electronic commerce to devices, especially tablets. So it is unclear to me whether the disappointment over e-commerce this year is premature. As we all know by now, both UPS and Federal Express seemed to miscalculate the last-minute rush of ordering. Fulgoni believes that retailers' deep discounting at the last minute helped drive volume but perhaps not overall revenue.

I am still curious about the final tally adding in device-based sales. As Chuck Martin reported yesterday, IBM’s tally showed a remarkable 29% of sales coming from tablets and smartphones. This represents a 40% gain over last year. I am not especially strong on math, but it seems to me if you add the underwhelming desktop sales gain with the impressive device-based sales gains, we may come out with less disappointing numbers in the end.

I asked comScore about this and was assured that, even with a shift to mobile, the tally will still track behind expectations overall. Andrew Lipsman, VP of marketing and insights, wrote me, "Even if there was more of a mobile shift than we anticipated, it wouldn’t account for more than 1 percentage point – which would still put us a few points below our forecast."

But one unambiguous gainer this year is Santa. NORAD reports this morning that Santa broke previous records, with 117,371 calls to his staff of 1,200 volunteers. This is up about 3%. Faith in the big red guy remains strong. His Twitter account nabbed more than 146,000 followers. His Facebook page attracted over 1.45 million likes. Almost 800 OnStar users asked for Santa updates on Christmas Eve as well. In all, 19.58 million uniques came to the NORAD site to track.

I envy the 1,200 military personnel who manned the Santa phones. It's hard to imagine a better Christmas Eve than that.