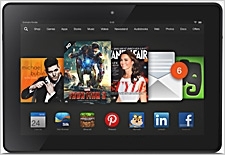 The Kindle Fire again proved a popular electronic gift in 2013, with activations of the Amazon device on Christmas Day spiking 24 times the average during the first three weeks of December. That compares to low-single-digit gains for activations of Apple and Samsung devices.

Device activations on Christmas overall were up 63% from the December average, according to a new report by app analytics and advertising firm Flurry. The findings come from the company’s analytics software tracking activity in some 400,000 apps on more than 1.2 billion mobile devices globally.

The company attributes Kindle Fire’s Christmas surge for each of the last three years in large part to its aggressive pricing, which starts at $139 for the 7-inch model. (The Flurry figures don’t include the Kindle e-reader.)

“Amazon sells Kindle tablets at cost, putting them within the Christmas budgets of more people than some other devices. The reason Amazon sells tablets at cost is that they are a channel for promoting physical goods and promoting and delivering digital content,” stated a blog post today by Mary Ellen Gordon, Flurry’s head of research.

Amazon on Thursday said it sold “millions” of Kindle devices during the holiday season. The Cyber Monday shopping weekend was the best ever for Kindle Fire tablets and Kindle e-readers. While impressive, its 24-fold increase in Christmas activations was down from 40-fold and 35-fold gains in each of the prior two years.

In the overall tablet market, Amazon doesn’t come close to challenging the share of Apple or Samsung, which had about 30% and 20%, respectively, of the market as of the third quarter, according to an IDC estimate.

Still, the Kindle shines as a holiday gift. Relatively low pricing also helps explain why Acer sees a bigger lift in Christmas activations than many other manufacturers, although its fivefold increase it is well behind Amazon’s rise. Both companies also benefit from the overall popularity of WiFi tablets as holiday gifts. Activations for WiFi-only tablets grew sixfold on Christmas, versus much smaller gains by cellular tablets and smartphones.

“We believe WiFi tablets are the preferred connected device gift, since they work out of the box. Cellular-enabled tablets and smartphones require a data plan, creating an adult gift recipient version of children receiving toys with batteries not included,” stated Gordon. They are also among the least expensive connected devices.

Flurry said it plans to release a report on app activations.