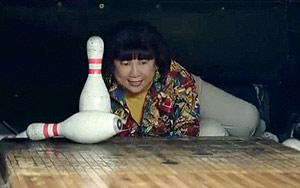 Procter & Gamble's Old Spice male hygiene brand is touting a reformulation of its Body Spray products with a campaign breaking this week that spotlights the fact that users need only apply the new product once per day.

The campaign plays on the idea that over-spraying of body scent is a scourge. That's only a partial exaggeration: At least one school in recent months had to shut down because of health issues resulting from overuse of body scent by sixth graders. Old Spice is also introducing two new scents — Bearglove and Lionpride — to its Wild Collection lineup.

The effort, "Smellcome to Manhood," centers on body spray as a bellwether of adulthood for young men and early teens. The conceit: when they overuse, they become men too soon, to their moms' despair. The new products have a patented formulation using a cyclic molecule called MBCD that, per the company, serves as a nano catcher's mitt for active formulae: when you are dry, the essences are retained; when you sweat, they are released, then reabsorbed when you're dry again. Though the campaign, via Portland, Ore.-based Wieden+Kennedy, doesn't get technical, the brand is talking about the new formula in a humorous "educational video" as part of the digital campaign on social media and OldSpice.com.

Television elements comprise three spots, one of which involves lachrymose moms singing in a musical-theatre style about their sons growing up too soon. The moms insert themselves into their sons' dalliances in frankly creepy ways while they bemoan the end of their sons' age of innocence. One mom slams to the ground after having apparently fallen from the sky, then sits up with a violin to serenade her son. One washes up on the beach like a corpse to witness her son and girlfriend. Another emerges like an exorcism client from beneath a sofa cushion, sliding along the floor while singing. Another is extruded from from a bowling alley ball return unit. No wonder the kids are dating.

The first spot makes its television debut during NFL Wildcard Weekend on Sunday. The other spots are running now on social media channels, and the company says there will be digital banner and rich media ads on sports, entertainment, humor and men's interest outlets.

The company did a survey with assist from PR agency Citizen Relations that found over-spraying is due to current scents fading too quickly and the lack of education on how to properly apply it. Over three-quarters of the respondents in a survey of 2,000 younger consumers, via YPulse, said they overspray. Forty-five percent of young guys said they reapply body spray because they thought their scent was fading.