From The 'Big 3' To 'Big Data:' TV Audience Targeting Comes Of Age

At a time when Madison Avenue has been consumed by the role Big Data is playing in transforming the rest of its marketing and media mix -- especially online, social and mobile -- parallel developments have been radically altering the infrastructure for planning, buying and evaluating its biggest medium, television.

The shift was highlighted by Monday's announcement that GroupM -- the largest buyer of media, including TV -- has created a new unit to accelerate the shift from old school media-buying to the next generation of data-driven audience-targeting, but GroupM was merely formalizing a fundamental change that has been taking place within it, and most other big agencies.

Much of the focus in the shift from media-buying to audience-buying has centered on the role of automation, especially programmatic platforms, exchanges, etc., because that has been the most visible part of the shift transforming the online display, social and mobile marketplaces, but the other part -- the shift taking place in the way TV audience targeting is changing due to the availability of an unprecedented amount of data -- is, in many ways, a much bigger and more fundamental shift in the way media is planned, bought and evaluated by advertisers and agencies.

“There are two significant trends that will have a dramatic impact on TV advertising,” asserts Dave Morgan, founder and CEO of Simulmedia, which is one of a new generation of companies leading the charge toward TV audience-buying. “The first trend is data, the sudden availability of massive amounts of highly granular data -- both in terms of what people are doing on TV and what they are doing off of TV. The other significant trend is toward automation.”

While the shift toward automation has attracted most of the headlines and conference panel debates, Morgan and others say the shift toward more sophisticated audience targeting will be far more transformative to the TV advertising marketplace, because it will fundamentally change the basis of evaluating the medium and will shift massive amounts of advertising budgets within TV as well as across other media.

Morgan, an Internet pioneer (Tacoda) who helped develop the original framework for “behavioral targeting” -- Internet speak for audience targeting -- is betting on the data side of the shift, and he is not alone. This morning, Rovi -- which markets technology to consumers to help them navigate TV and other forms of video -- is announcing its entry into the advanced TV audience-targeting business at CES.

Rovi is calling its new service an Audience Management Solution, and says it is focusing initially on helping the “sell-side” -- broadcast and cable networks and cable and satellite operators -- identify the audiences they have that represent the greatest value to the “demand-side” -- advertisers, agencies, and presumably, agency trading desks.

Like many of the other Big Data players, Rovi has built an elegant dashboard that can integrate multiple sets of data -- so called “first-party” data about what consumers are actually doing with a specific network, operator or brand, as well as third-party data representing attributes about an audience that brands or agencies want to target. By integrating those disparate sources of data, Rovi -- like the other new TV audience data firms -- says it can come up with a better picture of the underlying value of TV audiences, and consequently, enhance the value of the advertising inventory they have to sell to advertisers and agencies.

Rovi is not alone on the sell-side equation. Visible World spinoff AudienceXpress has been working with cable and satellite companies to pool their local advertising inventory into national “unwired” network buys based on the underlying value of their audiences, not necessarily the programs they are watching, per se.

Other players in the new TV audience-targeting business include Videology, Adap.tv, Clypd, and PrecisionDemand. The latter, which is run by former Madison Avenue media-buying honcho Jon Mandel, is the only one focused purely on the buy-side, and in many ways the system that Rovi is launching looks remarkably like the dashboards and interfaces Mandel's PrecisionDemand has built for advertisers and agencies, including detailed, color-coded checkerboard style grids identifying the key audience attributes -- and value -- of discrete TV audience segments (see example of Rovi's below).

Ironically, in its first iteration, Rovi is downplaying the unique viewer insights it gleans from its own first-party database representing what consumers are actually doing via its navigation systems. Instead, it is utilizing that data as a kernel to integrate other data enabling networks and operators to identify their most valuable audiences.

There are two modules to Rovi’s new audience management system: One for networks and operators to optimize their own inventory for their own on-air promotion; and another that enables them to optimize the value of that inventory to sell to advertisers and agencies. By looking across both modules, Rovi says a network or an operator can develop a meta view of what would be the best “yield” for that inventory: selling it to an advertiser for revenues, or using it to promote its hows to viewers.

Simulmedia also has similar modules enabling networks and operators to optimize their own audience inventory, and on Nov. 27, 2013 was granted a patent from the U.S. Patent and Trademark Office for it.

Patent litigation has recently become a hot issue in the advanced TV targeting marketplace, including a suit and countersuit that was recently settled by two big addressable TV advertising players, Invidi and Visible World. Terms of that court judgement have not been disclosed, but the CEOs of both companies claimed some form of victory.

Simulmedia’s Morgan says he is not obtaining patents to preclude others from entering the advanced TV audience-targeting business, and he says he's encouraging other players to come forward to help develop a richer marketplace of data that makes TV advertising -- and promotion -- more effective. By doing that, he says, the vast amount of TV advertising inventory that he believes is “undervalued” because it is so-called “run-of-network” filler, or sold to direct-response marketers, can rise in value by attracting the right advertisers seeking to reach their unique audiences.

“If you look at TV with a more granular measure, you will find that anywhere between 25% and 75% of TV ads are wasted either because they are going to the wrong target or because they’re going to too much frequency,” Morgan asserts, citing some of his own analytics.

Unlike some of the other audience data-targeting firms that are emerging, Morgan puts his own money -- and those of his investors -- where his mouth is. As part of Simulmedia's business model, Morgan makes a market around the under-priced TV advertising Simulmedia identifies by buying it and reselling it to advertisers who are looking for that audience.

Rovi executives say that is one facet of their business model that differentiates it from Simulmedia's -- that Rovi isn't taking any positions in the inventory and therefore doesn't compete in the marketplace for advertising dollars.

For his part, Morgan says it's just a means to an end for Simulmedia, because most of the big TV players so far have been loath to repackage their own audience inventory and make it available -- at scale -- for advertisers and agencies.

Other big players -- including Google, Microsoft and VC-backed Spot Runner -- ultimately failed with earlier attempts because they failed to anticipate this “chicken-and-egg” part of the TV advertising business. That is unlike the online display advertising marketplace, where a virtually infinite capacity of inventory exists, big TV suppliers still control the lion's share of audience impressions, and if they refuse to make it available, it will slow the growth of the audience-buying marketplace.

That's one reason Simulmedia started by offering its data and analytics as a way for TV networks and operators to optimize their own inventory for their own on-air promotion, so that they could learn the value of improving the targetability of their audiences firsthand. The next stage, he says, is for them to understand how they can take that to advertisers and agencies in order to improve the overall value of TV advertising by making it “smarter.” 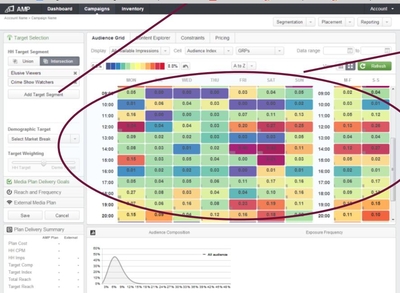