NowThis Now Part Of NBCU News: Second Investment/Content Mashup In As Many Weeks

Terms were not disclosed, but as with the Revere Digital deal, NBCUniversal said it was part of a strategic move to beef up its news-gathering resources and broaden its audience among important viewers -- in this case, younger ones who tend to loathe old school network news reporting.

NowThis News is one of a flock of Millennial-focused news start-ups hoping to crack the code for viewers who grew up in the digital age of ubiquitous, “snackable” content available anywhere, anytime, on seemingly any device. Its specialty is “short-form video” distributed across social platforms such as Facebook, Instagram, Twitter, Vine, YouTube and Snapchat. The video news segments are combined into NowThis News' Android and Apple apps and a mobile website, allowing viewers to “seamlessly watch updates delivered to their pockets, wherever they are.”

As more people consume news and information on mobile and social media, this collaboration will capitalize on the News Group's world-class news operations and NowThis News' approach to original, short-form storytelling to reach the next generation of users.

"We know that news consumption among younger audiences continues to grow, but in order to reach that audience, we need to continue to create video for the platforms they use most,” explained Patricia Fili-Krushel, chairman of the NBCUniversal News Group, in a statement announcing the relationship.

As part of the deal, NBCUniversal and NowThis News said they will collaborate on original short-form news content tapping the resources of “Today,” MSNBC, News News and CNBC, including what they described as “mashups” (pop culture-focused) and “explainers” (news analysis). 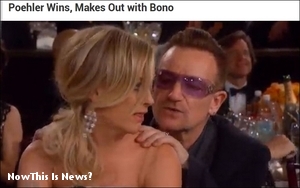