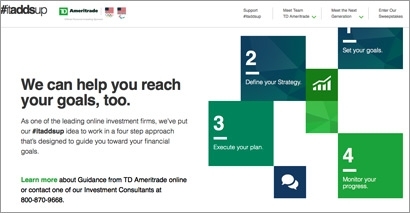 In addition to sponsoring the U.S. Olympic Committee and Team USA, TD Ameritrade is supporting seven U.S. Olympians along with “next generation” future Olympians.

"Their success as athletes is determined by small moments that add up over time, not unlike an investor saving little by little for a long-term goal,” DeLilli tells Marketing Daily. Athletes also need to save money to fund their training and travel expenses, which can be quite a challenge.”

TD Ameritrade's #ItAddsUp campaign demonstrates how little bits of effort add up to great things over time, she says.

“Every mention of the hashtag on social media will help the seven 'next generation' athletes get closer to their dreams of competing in the 2018 Olympics, by adding funds to their TD Ameritrade investment accounts," DeLilli says.

A marketing campaign -- which includes TV ads featuring select athletes, as well as robust digital and social components -- celebrates the many important small steps these athletes have made along the way.

TD Ameritrade has pledged to support seven Olympic athletes competing this year and paired them with seven young athletes who hope to compete in the 2018 games but require financial assistance to make their dreams a reality.

In addition to sharing content from the athletes’ journeys to Sochi, @TDAmeritrade is also hosting weekly Twitter sweepstakes featuring prizes like a snowboard signed by Louie Vito. Plus, fans have the chance to win a trip to the 2016 Olympics in Rio de Janeiro or a visit to the U.S Olympic Training Center.