TubeMogul recently added a new tool to its software -- BrandAccess -- which acts as a private marketplace. Publishers and broadcasters put private inventory into BrandAccess, which can then be bought in bulk and delivered programmatically.

Per the report, “BrandAccess works the same way direct deals do -- a marketer buys inventory from a publisher in bulk -- but software optimizes who sees which ad, when.”

That strategy is reportedly paying off. TubeMogul claims the that the video ad completion rates are 10.2% higher when viewed on a BrandAccess site, while click rates 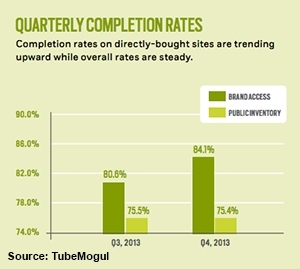 Because comparing “premium,” direct-sold inventory to remnant inventory is thought, by some, as a case of apples and oranges, perhaps the bigger story from the report is that completions rates for inventory bought and delivered via the programmatic direct method is trending upward. Inventory bought via open exchanges has remained stagnant.

The data comes from “tens of millions” of impressions delivered by TubeMogul within the United States.