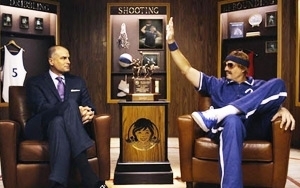 Each of the videos shows Bilas both interviewing and playing one of five different fictional players representing the key skills of the complete college basketball player (shooting, dribbling, passing, rebounding and defense) -- the same skills represented by bronze figures atop the Wooden Award.

The first video in the “Jay Bilas & The Wooden Award 5" series, "The Drain," can be viewed on Wendy's YouTube area. The others will be released every other week during the season.

The series' launch was timed to follow the Jan. 22 release of the Midseason Top 25, the 25 college players currently considered frontrunners for making the official voting ballot for the 2014 Wooden Award (based on voting by the award's official advisory board, comprising sportswriters and sportscasters).

The videos, created by the VML agency, encourage public voting for the award at www.woodenawardvote.com, to earn chances to win a trip for two to the 2014 John R. Wooden Award Gala in Los Angeles.

Fans can vote, and earn an entry, once per day during the entry period. Those who share via Facebook or Twitter to encourage friends to vote can also earn up to 10 bonus entries.

Wendy's is promoting the video series and the voting on its Twitter and Facebook accounts. Bilas has also tweeted about the videos.

Per its agreement with The Los Angeles Athletic Club (LAAC) -- which created the award in 1976 to honor legendary UCLA coach John Wooden (and where the live, televised announcement of each year's winner is made) -- ESPN is the exclusive announcement partner for the award.

Wendy's Wooden Watch segments/content are also included in various ESPN TV and radio shows during the college basketball season, and Wendy's serves as the sponsor of Rivalry Week, which precedes ESPN's conference championship tournaments coverage. In addition, Wendy's Wooden Watch-themed ads appear in ESPN The Magazine throughout the season.

This is the second year for the LAAC/ESPN/Wendy's men's Wooden Award partnership, which launched during last year's season.

Wendy's says that it chose to sponsor the Wooden Award because it honors athletes who "are model citizens, exhibit strength of character both on and off the court, and make outstanding contributions to team play" -- values that match Wendy's own heritage, culture and values.

A Wooden Award is also presented annually to the women's college basketball player of the year.