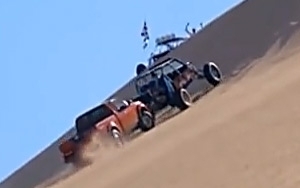 The 30-second spot in question, "Hill Climb," which aired in 2011, showed the mid-sized Nissan Frontier pickup truck pushing a dune buggy up a steep sand hill -- something the truck cannot actually do.

Under the proposed settlements, Nissan and TBWA Worldwide, Inc. are prohibited from using deceptive demonstrations in advertisements for pickup trucks.

The ad showed the vehicle rescuing a dune buggy trapped in sand on a steep hill, while onlookers observe the feat in amazement. It was produced in a realistic “YouTube” style, as if it were shot on a mobile phone video camera.

The administrative complaints allege that Nissan and TBWA violated the FTC Act by representing that the ad accurately showed the performance of an unaltered Nissan Frontier under the conditions that were depicted. In fact, the truck is not capable of pushing the dune buggy up and over the hill, and both the truck and the dune buggy were dragged to the top of the hill by cables, according to the complaints. The complaints also allege that the hill was made to look significantly steeper than it actually was.

“Special effects in ads can be entertaining, but advertisers can’t use them to misrepresent what a product can do,” said Jessica Rich, director of the FTC’s Bureau of Consumer Protection, in a statement. “This ad made the Nissan Frontier appear capable of doing something it can’t do.”

Under the proposed settlements, Nissan and TBWA cannot misrepresent any material quality or feature of a pickup truck through the depiction of a test, experiment, or demonstration. The orders do not prohibit the use of special effects and other production techniques as long as they do not misrepresent a material quality or feature of the pickup truck.

“Nissan takes its commitment to fair and truthful advertising seriously," said Travis Parman, a Nissan spokesperson. "The company has been and remains committed to complying with the law.”

The commission vote to accept the consent agreement package containing the proposed consent orders for public comment was 4-0.