What brand ran the most successful social media campaign last year? Coca-Cola? Starbucks? Try Kroger. According to social analytics firm Unmetric, the grocery store chain had the top campaign across 13 key industry sectors with its “Guess the Gift Card” contest around Thanksgiving.

It beat out other high-profile campaigns, including Visa’s #GoInSix travel effort, Cartier’s holiday promotion and Sony’s push behind the PlayStation 4 in terms of generating the highest engagement score—a figure from 1 to 1,000, based on total interactions, such as likes, shares and comments across Facebook and Twitter, along with a brand’s number of fans, and the number of people who could actively view its content.

Unmetric highlighted Kroger’s effort by rolling out a new competitive intelligence feature in its analytics platform that lets brand managers track real-time activity and interaction with individual social campaigns. It also tracks how they compare with those from other companies within their industry.

The new capability takes the form of a “Campaigns” tab in the Unmetric dashboard, which already allows companies to monitor and compare the performance of brands, according to metrics like number of fans, posts, sentiment, engagement and (brand) responses to user posts.

Similar to the engagement score, Unmetric has developed a benchmarking system that assigns brands scores from 1 to 100 by analyzing and weighing 24 quantitative and qualitative social media indicators overall. The idea is to provide a more complete picture of a brand’s social influence than that reflected by its number of fans or followers.

By drilling down to the campaign level, the company is helping brands keep up with the frenetic pace of social-media marketing. In the old media days, a brand would run one campaign every six months,” said Unmetric CEO Lux Narayan. Today, they run six campaigns a month.” For each, that could mean 100 tweets, 30 Facebook posts and 50 photos on Instagram.

To identify individual campaigns, the company uses a combination of artificial intelligence algorithms and a live team of social-media analysts to assess the machine-driven findings. Narayan said signals like hashtags make it easier to pick out campaigns from the social chatter, but the system also uses natural language technology to find frequent correlations between words like “hunger” and “games” that might signal a campaign.

The “Campaigns” screen in the Unmetric dashboard allows users to compare social campaigns of up to three groups of three brands each. The campaigns can be sorted according to engagement score or by date. At launch, the service is showing only campaigns on Facebook and Twitter, but it will eventually add results from the other three major social platforms it tracks for brand monitoring: Pinterest, Google+ and LinkedIn.

Companies working with Unmetric include Subway, Toyota and Cisco, as well as agencies such as Zocalo, BBDO and Saatchi & Saatchi. 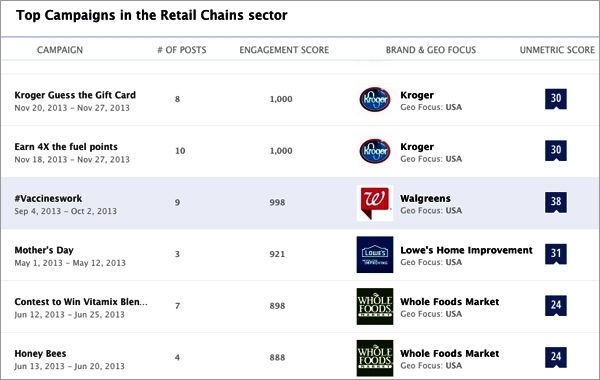