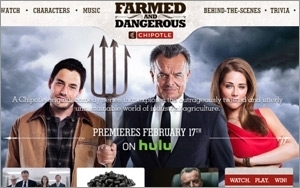 Chipotle Mexican Grill is continuing its (lightly) branded content fusillade against "industrial agriculture" -- this time with a satirical video series, "Farmed and Dangerous."

The pilot for the initial, four-episode (each a half-hour) season (more seasons are expected) will be available free on Hulu.com and via the Hulu Plus subscription service starting Feb. 17. Additional episodes will become available on consecutive Mondays.

The premise: A fictional big-ag company dubbed Animoil has developed petroleum-based animal feed (the "PetroPellet"), which is actually designed to reduce industrial agriculture's dependence on oil by eliminating the need to grow, irrigate, fertilize and transport the vast amounts of feed needed to raise livestock on "factory" farms.

In the trailer, now viewable on the series' Web site, Animoil's chief executive, "Mick," reveals the PetroPellet to "Buck Marshall," the head of the "Industrial Food Image Bureau (IFIB)," describing the new feed as "the biggest improvement in agriculture since synthetic growth hormones." (Buck: "You're feeding cattle petroleum? Nobody wants oil in the food chain." Mick: "Well sure they do. There's peanut oil, olive oil...").

But the test cows being fed PetroPellets explode, and the security video of the event goes viral after being posted on the Internet by "Chip Randolph," leader of the fictional Sustainable Family Farming Association. That leaves Buck and the IFIB scrambling to control the PR crisis, as Mick breathes down their necks.

The video series is a new vehicle for Chipotle's marketing strategy of employing subtly branded content to drive conversations about agriculture and food production that support the restaurant chain's "Food with Integrity" brand promise/differentiator. (See MediaPost's OMMA "Client of the Year" Chipotle profile.)

“Much of our marketing is aimed at making consumers more curious about where their food comes from and how it is prepared,” said Mark Crumpacker, chief marketing and development officer at Chipotle, about the new video series. “By making complex issues about food production more understandable -- even entertaining -- we are reaching people who have not typically been tuned into these types of issues.

"We think of ‘Farmed and Dangerous’ as a values-integration rather than typical product-integration," Crumpacker continued. "The show addresses issues that we think are important -- albeit in a satirical way -- without being explicitly about Chipotle. This approach allows us to produce content that communicates our values and entertains people at the same time.“

“The characters and plot reflect Chipotle's position on sustainable agriculture and enables Chipotle to communicate with more engagement than traditional advertising,” adds Tim Piper, a partner in Piro and director of “Farmed and Dangerous.”

The series is also being tied to a trivia contest/sweeps in which each Tuesday from March 4 through May 6, the brand will give away 5,000 "buy-one/get-one free" mobile offers for each episode that's aired. On May 6, a random drawing will be used to select 100 grand prize winners of a Chipotle catering party for 20 people.

The series was executive-produced by Crumpacker; William Espey, brand voice lead at Chipotle; and Piro's Piper (“Dove Evolution,” “The Palace of Light”) and co-partner Daniel Rosenberg (“Inside Man,” “Righteous Kill”). It was written by Rosenberg, Piper, Mike Dieffenbach (“Less Than Perfect,” “Retired at 35”), and Jeremy Pikaer (Academy Award nominee for “Bullworth”).