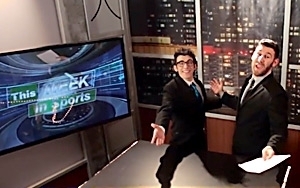 Fox Sports Digital invited a dozen YouTube stars from YouTube Space L.A. to compete for a new sports series on FoxSports.com and its dedicated YouTube channel. The winning video, announced Thursday, came from the guys behind the AVByte YouTube channel, who re-envisioned “This Week in Sports” as a one-minute musical.

Fox Sports is giving the AVByte team a development deal worth $1 million, some of which will be used to air the new property across Fox’s other media properties. The AVBytechannel launched in 2011 and made its name with Hipster Disney Princess - The Musical, which has so far accumulated more than 9.4 million views.

Helping to fund the venture is Ford Fusion, which has signed on as the project’s premiere sponsor.

Google opened YouTube Space L.A. last year, as part of a broader effort to turn YouTube into a destination for premium original content. The Fox Sports deal is the biggest project yet to hit YouTube Space L.A., according to its creative manager Kathleen Grace.

“It's something we've never done before in the Space -- brought together a major media company … a marquee brand … and some of the best emerging talent in the industry to develop a new content brand,” Grace said. “It's taking collaboration to a new level.”

To date, additional partnerships have included YouTube Space L.A.’s work with Interscope on “Interscope Introducing” and with BBC America and Nerdist on the live simulcast of the 50th anniversary celebration of “Dr. Who.”

Formerly the home of the Howard Hughes airport, YouTube Space LA is located in the Playa Vista area and totals nearly 41,000 square feet. It consists of many large production stages, a backlot equipment room with cameras, lights, mics and grip equipment available for checkout, and post-production resources ranging from private editing suites to voiceover recording booths.

Taking Google’s production business to the East Coast, it is planning to open YouTube Space N.Y. by October of this year. “We're very excited that it will be opening later this year and include a Brand Lab,” Grace said.