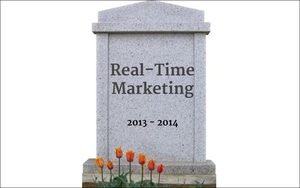 Experts tell me I have only six seconds to engage you. If the six-word “story” above did not, then I have failed. If it did, then I have also failed, because that’s pretty much all there is to this one: that some industry experts have declared real-time marketing is officially dead. But go ahead -- read on if you want.

“If you’re talking about real-time, you’re already too late,” Matt Rednor asserted during a keynote that opened the Social Media Insider Summit on Captiva Island Thursday. Rednor, who is chief strategy & innovation officer at MRY, was one of the experts who declared real-time marketing dead during the three-day summit in the not-so-sunny state of Florida.

“You can keep the acronyms,” said another, Matt Wurst, director of social marketing at 360i -- referring to RTM, but modifying it to read “right-time marketing,” which he described as “creating the right content, for the right consumer, on the right platform at the right time.”

What gives Wurst the right to say that? Because 360i is one of the agencies that have become so associated with the term real-time marketing, even though he said the agency itself never uses it.

Wurst, who during his presentation projected an image of a tombstone similar to the one that illustrates this story, said 360i became the poster child for real-time marketing because of its seemingly spontaneous tweet campaign for Oreo during last year’s Super Bowl blackout, but he said it was really part of a “right-time” strategy that planned ahead of time for the opportunity when it presented itself.

MRY’s Rednor described a similar approach, labeling it “anticipatory” marketing. He said it is now imperative for brands to anticipate what messages and content will engage a consumer before the right moments happen, because when they do, a brand only has six seconds to make it work.

“Your time is precious,” he noted, adding that this new six-second standard for consumer media attention spans is the reason why Twitter’s Vine videos are “six seconds long” and why Snapchat exchanges only last for five seconds.

And he said that is the reason why MRY developed a social media campaign strategy around content that is only six seconds long.

How did MRY come up with that strategy? Actually, it was an accident that lasted only a few seconds. He said during MRY’s brainstorming session for Visa, one of the members of the social media team wrote an inspirational phrase on the agency’s whiteboard -- “Go” -- but due to his poor penmanship, others read the “G” like a “6.”

Someone else put a dot between it and the “0” making it read like “6.0,” and that’s how a six-second marketing strategy was born -- in about six seconds or so.
real-time
5 comments about "It's official: real time, now dead.".
Check to receive email when comments are posted.
Read more comments >
Next story loading