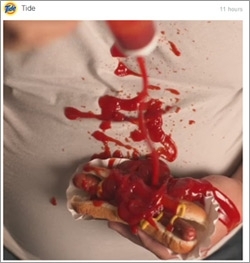 Someone call in the French theorists. The Super Bowl is begging to be deconstructed. Super Bowl ads have been referencing themselves and the ad battle itself for a number of years already. But at last night's game, the level of reflexive content both on air and on the second screen hit a new high. The funniest and best use of the cross-screen ad antics actually came after the game with the Esurance spot bragging that the brand had saved $1.5 million by running an ad right after the game. It passed the savings on to us by promising to award that $1.5 million saved to someone tweeting to a hashtag. Brilliant. It netted over 1.2 million tweets overnight.

At some point you have to expect that the self-consciousness of Super Bowl advertising will undercut any of its effectiveness – if there is any left. My wife and I disagreed throughout the night on the impact of the sentimental ads. The crowd favorite from Bud “Puppy Love” made her teary and me unmoved. She was all in with the puppy's forlorn face. I never bought the romance. But worse, the Super Bowl genre of heartstring pulling has become so rampant and postured that I am distanced from these attempts to get me to well up. I was judging its craft, which I found manipulative and lacking, rather than the story.

The only deep emotional response I got during the night was the feeling of total heartbreak at seeing Bob Dylan shill for a car company. Say it ain't so, Bob. The relative absence of reaction on the second screen about that milestone in commoditization left me feeling lonesome and outdated.

Dylan's epic sellout moment almost made me forget that Bruno Mars gave us one of the best half-time performances in memory. Straightforward, pure talent and energy -- no frustrating attempts at extravaganza. I noticed that the Twitter feeds went noticeably quiet during his show. It was one of the few pure moments of unself-conscious creativity in the whole game.

The real Super Bowl winner was Twitter. I believe that advertisers treated the micro-blog as the default parallel experience most people were using. They promoted their own ads and became a stream where non-advertisers cleverly promoted the fact that they weren't advertising during the game.

But the biggest trend of the night on this second screen was advertisers calling out to one another and goofing on the ads from other brands. Tide and Heineken's Newcastle Ale brand staged the most elaborate programs. Tide detergent picked up themes from Jaguar, Butterfinger, Heinz, and M&Ms and then posted Vine videos converting the theme into occasions for getting out stains. They even blowtorched a pile of M&Ms. “But what if they do melt?”

Newcastle Ale was even more elaborate. The company bragged that it did not produce an expensive ad, but storyboarded an extravaganza they “would” have made if they wanted. It was teased with a video of actress Anna Kendrick prepping for an ad the brand couldn't afford to make. The IfWeMadeIt.com site featured storyboards of the unmade spot as well as Newcastle remakes of Newcastle renditions of the Stephen Colbert pistachio, GoDaddy tanning salon and several other game spots.

Say what you will about Super Bowl advertising falling in on itself in self-reference. Rather, don't bother. There are at least 20 Communications and Media Studies graduate students already tweaking their dissertation proposals to handle it for us. In the end, for those of us who fail to appreciate sporting events, the amount of second-screen chatter and programming now occurring during the Super Bowl is only good news. I succeeded in pretty much ignoring the game itself for three hours last night. There was enough activity going on via the SB48 and SuperBowl hashtags, in Shazam and even in Zeebox to keep me entertained between the commercial breaks. My wife, who dislikes football even more than I, was actually reporting the touchdowns to me so I would look up. “I don't even know what is going on and I can see the Orange team is getting thrashed,” she said. “This is sad. I hope you really are recording 'Downton Abbey'.”