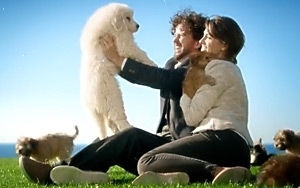 Having the right realtor help you find the right house is a feeling akin to being overwhelmed by puppies in a field, according to Century 21’s latest advertising campaign.

The new effort (via agency Red Tettemer + Partners) from the real estate company shows how a Century 21 agent can find the perfect home  for everyone. Starting with the assertion that it’s “Based on a true feeling,” one commercial begins with a couple in a field being overwhelmed by puppies. As they gleefully play with the pups, one of them asks, “What do you think?” The scene shifts to the reality of the house being shown, to which the couple declares its perfection.

Other commercials in the campaign (which all contain the “based on a true feeling” hook), show a man in business attire performing in a rock band and a woman finding peace in a zen garden.

The spots will air throughout the Olympics broadcasts, with a heavy focus on the bobsled competition. (Century 21 is the official real estate company of the USA Bobsled and Skeleton Federation.) Using the Olympics as a platform is a way to remind potential home buyers (and sellers) that the spring selling season is approaching.

“The TV commercials showcase the capabilities of Century 21 sales professionals and the connection they develop with home-buying consumers in a light-hearted and entertaining manner,” said Bev Thorne, chief marketing officer, in a release. “With these polar vortices gripping our nation in sub-freezing temperatures, these spots will also serve as a reminder to those watching the Games that the spring home-buying and selling season is right around the corner.”