The Mobile Bowl...Or, The Last Super Bowl Post I Am Writing...No, Really This Time 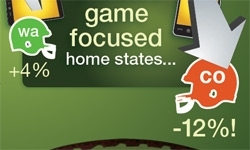 The annual Super Bowl is for marketing trade critics and reporters the story that never seems to end. By Wednesday most of us are sick of writing about the various takes, stats, claims, aftershocks, etc. Enough already!

Well, almost. Analytics and data provider eXelate sent me one more (final) dump of data they gleaned by sampling mobile traffic a week before and then during the Super Bowl, extrapolating from there to the general population and coming up with some estimates of how much devices figured into the game-watching experience.

If this is accurate, the data suggests enormous mobile usage as well as some predictable rhythms to it all.

For instance, eXelate estimates from their data that 60% of people armed with smartphones and tablets checked their devices at least once during the game. But when you parse that audience for age, Harris Interactive reported, about a third of viewers under the age of 45 were actually watching the game with the phone in hand. They were engaged in a range of activities, from checking news and in-game stats to engaging in social media or chat sessions. The central role mobile plays is clear from the fact that mobile usage during the game went up 27% from an average Sunday.

Now here is a really interesting cut of the data. For the two cities most involved in the game, mobile played much less of a role. In Washington, mobile use was measured at only 4% above a typical Sunday, and in Colorado is was actually 12% less. What does this tell us? Maybe mobile is a calculated and nominal distraction to TV when we know we are a bit less than fully involved? Or do we forsake devices when we are more emotionally invested in the content? This is not a novel idea, considering the low level of second-screen activity during dramatic programming compared to awards shows, reality programming, etc., where the shows provide more space for willful distraction.

This is confirmed by the fact that during halftime, both Washington and Colorado spiked in their mobile usage to 42% and 26% above average, respectively. When they got some breathing room, even the most engaged viewers went to the devices.

Overall, mobile usage went ballistic during halftime, presumably to catch up on other people's views or to reference the entertainment. As we have reported earlier, second-screen apps like Shazam saw huge interactivity on entertainment artists -- especially Bruno Mars -- during the halftime show.

Clearly, second-screening is happening on a massive scale, if not in quite the ways some apps and TV networks necessarily anticipated or want it to take place. Personally, I would really like to see more ethnographic and quantitative work done on this phenomenon so we can better understand the diversity of mobile usage that is going on during major and regular TV events. I think we will find that as with all other things, mobility exposes just how variegated and personal our responses to media are. The range of device usage during TV viewing is one more indication that the mass audience as we once knew it -- or idealized it -- is gone for good.

mobile, sports, super bowl, tv
1 comment about "The Mobile Bowl...Or, The Last Super Bowl Post I Am Writing...No, Really This Time".
Check to receive email when comments are posted.
Next story loading