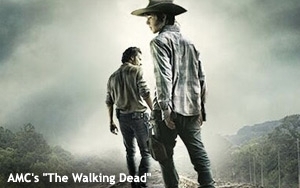 "The Walking Dead" -- the series that frightens and intimidates and frustrates network and studio executives throughout the television business like no show since Fox's "American Idol" in its early years -- returned to AMC's schedule last night with the first of eight episodes comprising the second half of its fourth season. And instantly, the Winter Olympic Games were forgotten, at least in my house. Nothing going on in Sochi could come close to finding out what was going to happen next to the ragtag band of human survivors struggling to survive amid the escalating horrors of a zombie apocalypse.

Frankly, I thought I might be somewhat annoyed by last night's episode, or a bit fed up with the overall hopelessness of the series' premise, especially after suffering through the first half of the fourth season, in which our heroes and anti-heroes made one dumb decision after another as they dealt with a deadly virus and were later brutally attacked by the insidious Governor, an enemy they should have dispatched ages ago. But then something wholly unexpected happened: Last night's episode, titled “After,” focused on the two most interesting characters left on the ravaged canvas and explored new levels of character development for them both.

I don't know if this episode was written in response to the sometimes harsh criticism the show received last fall (even as it set new ratings records and became the most popular program on all of television among advertising's prom dates, those desirable adults 18-49), or if it was planned to be what it was and run right when it did from the start. But it was the best episode of “Walking Dead” to come along in quite awhile, and it was strong enough in all the right ways to instantly reenergize the franchise and reinforce the profound emotional connections many of its characters have with its viewers.

Furthermore, there was a moment in the episode when I actually jumped. It's good to know “Walking Dead” can still deliver the shocks and the scares -- something no other “horror” series currently on television has ever managed to do, at least not on a sustained basis. It's one thing to be gross or disgusting, and quite another to be genuinely frightening.

I won't reveal any spoilers here, out of sensitivity to those who have not yet seen the episode -- many of whom may have opted to enjoy the fourth night of the Winter Olympic Games on NBC or the Beatles tribute special on CBS or, over on HBO, the fourth episode of the outstanding drama “True Detective,” which last night featured a prolonged, high-octane, breathtaking one-take segment the likes of which I have never seen in a television series. (It's a sequence that raises expectations about what television can do, in the way scenes in HBO’s “Game of Thrones” frequently do and many in Syfy's “Battlestar Galactica” often did.) But I will note that the two characters that the episode focuses on are young kickass Carl Grimes and warrior bad-ass Michonne. They each revealed emotional and psychological aspects of themselves that have always been there -- but which the audience has never before seen.

We've been watching Chandler Riggs, the gifted young actor who portrays Carl, and Danai Gurira, the fascinating actress who embodies Michonne, for many years now. Maybe we had to spend that much time with their characters before we could fully appreciate what Riggs and Gurira did with them last night, especially in each character's quieter moments. Credit also goes to “Walking Dead” creator Robert Kirkland, who wrote the episode. Many critics rave about many aspects of this series, but it isn't often cited as an example of a smartly written show. It is no exaggeration to say that there were bits of brilliance in last night's episode. (I never knew it was possible for a can of chocolate pudding and a young boy's eagerness to enjoy it to be something so profound.) The hour even managed to end on a happy note -- something that has never happened in this history of this series. It was almost uplifting.

It was great to have the live talk show “Talking Dead” back after “Walking Dead,” too. Quick-witted host Chris Hardwick was in top form, feeding spoonfuls of chocolate pudding to members of the studio audience and to Herschel's disembodied animatronic head while asking all the right questions of guests Danai Gurira and Executive Producer Greg Nicotero (who brought the head with him as a surprise).

As long as it has the right combination of guests, “Talking Dead” never fails to keep me watching AMC long after “Walking Dead” has ended. Given the ratings it generates off its relatively low production costs it is yet another reason for other networks to look upon AMC with a mix of apprehension and envy.