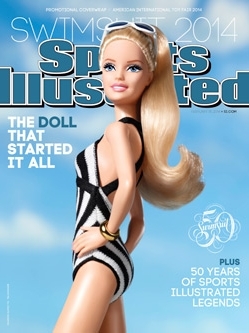 Meanwhile, the kerfuffle caused by Barbie’s #unapologetic campaign, revealed last week, continues. Mattel declined to tell Marketing Daily how much it paid SI for the promotion, which includes 1,000 mock covers to be distributed as Toy Fair got underway last weekend, as well as a four-page interior spread. “As a savvy businesswoman (she’s had over 150 careers, after all!), Barbie does not disclose the terms of her partnerships,” the spokesperson says.

But Barbie is down on her luck -- and no one could blame her for getting a little desperate. Mattel, which recently revealed that Barbie’s sales nosedived 13% during the critical fourth quarter, invited the world to comment on the aging legend, rocking the same swimsuit she wore during the Eisenhower presidency.

But plenty were distressed. “Explain that to girls struggling with body-image issues,” wrote one. “Barbie and SI #unapologetic about selling objectification from birth to death,” added another. Salon called it the “absurd, trolling Barbie cover.” And the Daily Dot asked, “Stupid mistake or calculated trolling?”

Next, of course, came the actual trolls, mostly blasting commenters as fat, ugly, and you know, caring about children and stupid stuff like that.

So far, the advantage seems to be in Barbie’s favor, and her midlife scream for attention seems to be working. “The brand’s recent activities are Mattel's way of placing Barbie back into the limelight,” toy expert Jim Silver tells Marketing Daily. “The #unapologetic campaign and Sports Illustrated cover create conversation around Barbie and bring her to the forefront of people’s minds.”

And SI seems to have had some fun with the project, too, including a video with famed photog Walter Iooss Jr., who shot the spread, using 22 different Barbies. (“She takes instruction almost silently,” he deadpans, “and she understands the light. She gets it.”)

But others are wondering if the stunt might not backfire, not just on the already-bruised Barbie brand, but on Sports Illustrated, too. "It’s likely to turn off any women who might have been warming up to the SI brand,” Hyaat Chaudhary, CEO of Carbon Media Group, tells Marketing Daily. "More women are watching sports today than ever before, meaning brands must be more aware of the impact their ad messages will have beyond their core target audience,” he says. “Sports and outdoor brands from the NFL to Cabela's to REI are recognizing this as a growth area. In addition, we see brands like Dove notching significant wins by moving away from what can be seen as an antiquated and stereotypical portrayal of women, so I don't see the buzz as worth the potential brand damage."

Peter Shankman, a public relations consultant, disagrees. “For Mattel, this is a fun stunt. And for Sports Illustrated, it’s not a risk. It got a new advertiser. But the whole point of the issue is to show boobs. Ask any typical reader of the magazine, and I promise, they won't be paying any attention to Barbie.”

And ultimately, that’s Barbie’s biggest problem. At 55, she’s increasingly invisible, no matter what she’s wearing. Parents have different ideas about toys. Girls have different tastes. And the whole world has different media habits.

“All it means is they’ve run out of ideas,” says one more commenter. Another wonders, “Do  they still make magazines?”

Meanwhile, Target is promoting the golden anniversary swimsuit collection on its fashion blog. The Sports Illustrated Barbie, which is described as “for the adult collector,” is also exclusive to Target, selling for $19.99.