'Always' Approaches Half: 48% Now Connected All The Time

It's difficult to say exactly what that is up from, because it is the first time Vivaldi conducted this particular research, but in its just-released “Always-On Consumer Study,” it compares it with previous studies conducted by Forrester Research over the past three years, suggesting that the percentage of always-on consumers has nearly doubled from just 25% in 2010 to 48% in 2013.

While the research is self-reported, and may not be directly comparable to Forrester’s past studies, the finding is noteworthy, because it shows a changing mindset on the part of consumers, who at least perceive themselves to be more hyper-connected than ever before. 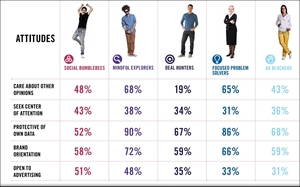 The study is also interesting, because it breaks always-on consumers into five sub-segments (see graphic) suggesting that there are distinct differences among the always-on population in terms of why they are connected, how they perceive brands, their own data, and the relationship they have with media and devices.

The segmentation is a very marketer-centric perspective, but it is one of the first I've seen that at least attempts to understand the discrete nature of consumer intent driving always-on connectivity, and will be important to track over time.

consumer, media measurement, mobile
1 comment about "'Always' Approaches Half: 48% Now Connected All The Time".
Check to receive email when comments are posted.
Next story loading