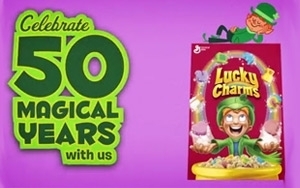 General Mills's Lucky Charms is running a campaign across digital and traditional media pegged to its 50th anniversary this year.

A variety of ads, promotions and contests are being deployed during the 50 days leading up to St. Patrick's Day, which the brand has designated for its official birthday party (to take place in Chicago, during the traditional dyeing of the river green).

*A 15-second video/national TV spot featuring pop group Pentatonix singing the brand's "Magically Delicious" theme song. Since being posted on YouTube on Jan. 24, prior to its first broadcast airing two days later, the video has been viewed nearly 100,000 times.

*In a consumer contest hosted on Casetagram's site, fans can design customized Casetagram phone cases bearing Lucky Charms images. The top five designs, determined in part by amount of social media exposure and voting, will be sold exclusively on the Casetagram site.

Although most of these anniversary activities seem geared to kids, Lucky Charms is also celebrating the success of its adult-targeted marketing efforts.

Nearly half (47.8%) of all Lucky Charms are now consumed by adults (18 and older), according to NPD's National Eating Trends data for the three years ending February 2013.