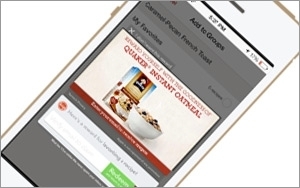 Meredith Corporation has begun serving up coupons in its Must-Have Recipes app courtesy of a new partnership with mobile rewards network Kiip. The deal will provide app users with in-store coupons, product samples and other incentives from brands including Campbell's, Macy's, Procter & Gamble and Unilever.

The Must-Have Recipes app from Better Homes and Gardens has already integrated Kiip's rewards SDK (software developer kit) to offer deals, with the Allrecipes “Dinner Spinner” app set to follow soon. Together, the two apps have been downloaded 20 million times, according to Meredith, which offers some 30 mobile apps overall.

App users are presented with offers at what Kiip calls “engagement moments,” which in this context means an action like sharing a recipe or completing a shopping list. A user would then be able to redeem such a reward by entering their email address. One current offer running in Must Have Recipes is for a free sample of Quaker Instant Oatmeal when a user bookmarks a recipe.

Alysia Borsa, VP, tablet/product development at Meredith, said the company has tested coupons in apps previously but not on a sustained basis or wide scale. “The Kiip experience, performance and partners were impressive relative to others we have talked to,” she said. “ We're constantly talking to potential new partners to improve our offerings and also help to monetize our apps.”

For Kiip, the partnership with Meredith signals its ongoing efforts to broaden its focus beyond mobile gaming to other app categories including health, fitness, food and other lifestyle areas. But Kiip founder and CEO Brian Wong said the Meredith deal is the first it has done to date with a major media company. The deal includes an ad revenue-sharing arrangement between the companies.

In the month or so since Meredith incorporated Kiip-powered rewards into the Must-Have Recipes app, Borsa said it had seen strong engagement on some offers and preliminary indications of higher retention from those presented with offers. But she cautioned against reading too much into results at this stage.

Whether Meredith will extend the incentives beyond the two recipe-focused apps to any of its other titles is not clear. But it's not difficult to imagine it could use the Kiip platform to add offers and coupons to other company apps tied to its magazines like EveryDay with Rachael Ray, Fitness, and EatingWell.

Earlier this month, Kiip said in a blog post that it had served more than 2 billion offers across its rewards network in 2013, marking a 10-fold increase from the prior year.