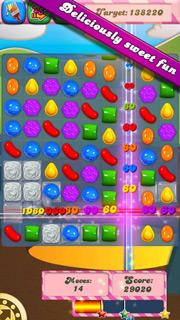 In its filing to become a publicly-traded company, the maker of the hit mobile game Candy Crush Saga is touting “data-driven marketing” as a key to its success. King Digital Entertainment plans to raise as much as $500 million through its IPO, and will trade under the ticker symbol “KING.”

The casual game company reveals in its F-1 form filed with the Securities and Exchange Commission on Tuesday a vertiginous growth trajectory. It reported a profit of $568 million last year on revenue of $1.9 billion, after generating $164 million in sales and $7.8 million in profit in 2012.

But with Candy Crush so clearly driving King’s turbo-charged growth, the company took pains to emphasize it’s more than a one-hit wonder. “We believe we have a repeatable and scalable game development process that is unparalleled in our industry,” stated its IPO filing. In that vein, King highlighted its marketing process as a key element of its business:

“We believe the inherently social nature of our games, our data-driven marketing processes, our cross-platform technology infrastructure and massive player network are key competitive advantages. We obtain the vast majority of our installs organically or through viral channels that are driven by the effectiveness of our social features,” explained its filing.

King further stated that it runs thousands of discrete campaigns every day, “each with individual target metrics, and all subject to the same target return parameters.” As of the end of 2013, it reported an audience of 324 million monthly users, among which it says it has a record off long-term retention and ability to cross-promote new games.

Still, all of that begs the question of why the company’s targeted marketing techniques haven’t produced more hits among its nearly 180 other games besides Candy Crush.

King may be especially keen to assure investors it has a formula for long-term success in light of the difficulties that have hobbled game maker Zynga following its 2011 IPO. One advantage King compared to Zynga is that it’s already focused on mobile gaming, so it won’t have to make the same transition from desktop to devices.

During the fourth quarter of 2013, King said 73% of its “gross bookings” came from mobile. Most of its revenue overall comes from the sale of virtual items and features in its free-to-play games that might include extra lives or additional game content. This activity in turn depends on distribution of games through third-party platforms.

“In 2012 and 2013, we derived a majority of our revenue from distribution of our games on the Apple App Store, the Google Play Store, the Amazon Appstore and Facebook, and most of the virtual items we sell are purchased using the payments processing systems of these platform providers,” stated King’s IPO filing.