'House Of Cards': To Binge Or Not To Binge? 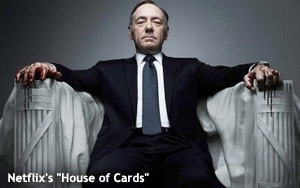 Are the original series produced by Netflix truly designed to be binge-watched -- that is, viewed like 13-hour movies rather than serialized programs -- or is that just the new thing to do as identified and promoted by the media? And how exactly does one define “binge”? Is it watching a series in its entirety in one day or one weekend? Are additional days allowed to complete the binge, or does the viewing pattern then become something else? Is bingeing really fun, or does it feel like a chore, or homework? Is a binge satisfying? Or is it like eating too much pizza or ice cream in one sitting? And what happens after a binge? What's the point of rushing through something you really enjoy only to be left with the realization that you will have to wait a year to enjoy more of it?

I was discussing the pros and cons of bingeing with a noted television critic this past weekend. He binges out of professional need rather than personal choice, but he does enjoy sitting through many episodes of a series he likes in one stretch, as he was attempting to do with the second season of “House of Cards” over the holiday weekend. We both agreed that there is something about this show that lends itself to bingeing, but we weren’t sure if that was the original intent of its producers and the executives at Netflix.

I mentioned that I wouldn't want to watch everything that way, even if I could. For example, I said that I wouldn't care to watch each season of CBS' “The Good Wife” in one blast, because I enjoy anticipating, watching and thinking about each new episode as it comes over a period of eight or nine months. It's fun to live with, as many other series are. And yet I had to admit that I might be tempted to rush through it if every episode were available to me all at once. (I could approach it that way, either On Demand or on DVD after each season is finished, but I choose not to.)

I think it is better for a network when viewers are into the weekly viewing experience, with all the attention that brings to the network and all the anticipation it fosters in the viewer, if only because to some degree it keeps the network in play with the audience over a long period of time. Bingeing doesn't necessarily strengthen that connection. I have not paid much attention to Netflix since last summer when I polished off the first seasons of “House of Cards,” “Orange is the New Black” and “Hemlock Grove” and what I believe will be the only season of “Arrested Development.” Of those four, “House” and “Orange” engaged me, “Hemlock” felt like a complete waste of time and “Arrested,” while well-acted, pretty much exhausted any further interest I might have in the Bluths.

When I was done with those shows I was also done with Netflix. In fact, I suspended my subscription when I realized I hadn’t watched anything on it in months. (Its selection of movies leaves something to be desired.) I probably would have remained a subscriber if I had been made to wait week by week for fresh episodes of those shows.

Meanwhile, we now have a new season of “House of Cards” to enjoy -- if enjoy is the right way to describe the feeling one gets watching a story about powerful people tormenting and in some cases killing less powerful and/or ordinary people. It seems to be all about the rich eating the working class alive. We get enough of that in our everyday lives, don't we?

What we don't get is an utterly irresistible performance by Kevin Spacey as Frank Underwood, a ruthless politician who might be more at home among the lunatic fringe over on ABC's “Scandal” than in a show that strives for some degree of formal realism. Yes, realism. Consider this chilling comment Spacey made on “Late Show with David Letterman” the other night: “I've talked to a lot of politicians over the past year since the first season of our show came out a year ago. Here is generally what I get. They say 99 percent of the show is accurate, and the one percent that isn't [is that] you could never get an education bill passed that quickly.”

Spacey remains the best reason to watch “House of Cards.” My favorite aspect of his performance is the way Underwood repeatedly breaks the fourth wall and speaks directly to the viewer. Spacey's expressions when he does this are priceless. Underwood's words have never been more powerful than at the end of the Season Two premiere. I won't repeat them here, as Season Two is just too new and I don't care to spoil any of the fun for anyone.

By the way, I have not reactivated my Netflix subscription because I'm watching Season Two with my neighbors, who have been loyal Netflix subscribers since its DVD-only days. We're limiting ourselves to two episodes at any one sitting, sometimes with days off in between. I'm not sure how to define this viewing pattern: It's not a typical binge, but we'll likely be done with the season within a month.

tv
7 comments about "'House Of Cards': To Binge Or Not To Binge?".
Check to receive email when comments are posted.
Read more comments >
Next story loading