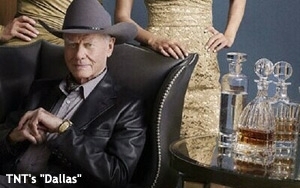 Warner Bros. yesterday announced that it is teaming up with Southfork Brewing Company to launch a new brand of bourbon -- the drink of choice of the late great J.R. Ewing on “Dallas.” (There's a Southfork Brewing Company? Who knew?) The third season of the current run of “Dallas” begins on TNT on Monday February 24. The bourbon will be available to the public near the end of March. Grievously, it will only be available in 14 states across the south and the Midwest. The rest of the country will have to wait until later in the year. Let's hope TNT renews the show for a fourth season so that the full impact of this new product launch can be realized.

Warner Bros. and TNT are really pulling out all the stops with what may be an unprecedented level of marketing and promotion for this “Dallas” season premiere -- perhaps because this is likely a make it or break it year for the show, which for the first time since the franchise began on CBS back in 1978 will have to carry on without J.R. As previously announced, on Monday a lone gas station somewhere in the country -- presumably near a major metropolitan area -- will be transformed into a flagship gas station for Ewing Energies, the global energy company on the series that was once known as Ewing Oil. The station will offer gas at a deep discount (while supplies last) ensuring long lines of cars waiting to fill up, significant media coverage (especially if those cars create traffic flow issues) and much frustration for owners of competing gas stations who have no say in the prices they charge for gasoline.

And now we have J.R. Ewing Bourbon, which will be marketed to distributors in this country by Prairie Creek Beverages and internationally by Melchers Group. A screen-printed image of Southfork Ranch, the home of the Ewing family, will be visible through the front of each bottle.

J.R. Ewing Bourbon seems like such a natural extension of the show that I can’t help but wonder what took everyone so long to develop it. There was much marketing of the J.R. character in the Eighties, including my favorite “Dallas” licensed product of all: The original J.R. Ewing decanter, which held liquor and played the “Dallas” theme song from a music box in its base. I received it as a gift decades ago and still have it. To the best of my knowledge the decanters were sold without alcohol inside. It was a hit at dinner parties back then -- and it may be so again if filled with J.R. Ewing Bourbon.

I've been watching “Dallas” since the start -- including the terrible reunion movies that bridged the original CBS series and the current TNT show – and while I can’t recall an episode in which J.R. did not enjoy at least one drink -- at home, in the office or at the Cattlemen's Club -- I was struck last season by some of Larry Hagman’s final scenes in which he sat quietly in his room at Southfork and poured himself a glass of bourbon from his own private decanter (available at the Ewing Oil Company Store). Even more memorable was a scene after J.R. died in which his ex-wife Sue Ellen, an alcoholic who went to hell and back because of her addiction in unforgettable episodes from the Eighties, coped with the loss of the most important man in her life by sitting in his room at the very same table and nursing a glass of the same bourbon.

The bourbon was so strikingly presented that I can't help but think the producers of the show knew that a new product inspired by it was in the making.

I trust the season of “Dallas” to come will explore Sue Ellen's return to the bottle, which can only have devastating consequences. (Perhaps the second most important man in her life, Dusty Farlow, will return from wherever he has been and once again save her from herself.) So I’m interested to see how the launch of a new bourbon in support of the show coincides with a story in which an alcoholic favors bourbon as her drink of choice while falling off the wagon.