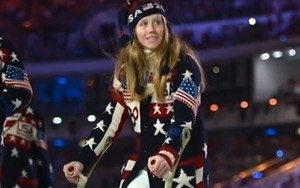 The spot features Heidi Kloser, 21, the Team USA moguls skier who tore knee ligaments and broke her femur following a crash on a training run on Feb. 6, prior to the opening ceremony of the Sochi 2014 Olympic Winter Games.

It was reported that Kloser, while being transported to the hospital via ambulance, asked her parents if she was still an Olympian, even though she didn’t make it to the starting line in her first Games, to which her mother Emily replied: “Of course you are.” As evidence of her place on Team USA, Kloser, with the help of her teammates, participated in the Opening Ceremony.

Having seen Liberty Mutual’s “Rise” campaign during NBC coverage of the Olympic Winter Games, advertising industry veteran Alex Bogusky sent a tweet to Liberty Mutual I that they should consider chronicling Kloser’s story in a new ad for the campaign.

The suggestion resulted in the ad that broke Wednesday during Olympic programming. Liberty Mutual Insurance’s “Rise” campaign was launched earlier this year in support of the insurance company’s sponsorship of the United States Olympic Committee and Team USA.

To say the brand moved fast in getting the ad put together is an understatement.

“To execute a brand new broadcast ad inspired by real-time feedback from Twitter, produce it in less than a week and have it air prime time during the Olympics broadcast proves the power of social media,” says Jenna Lebel, Liberty Mutual Insurance marketing director.

The brand had to mobilize quickly, from coordinating with Kloser and her family to getting the necessary approvals to the logistics of creating and airing the actual ad, Lebel tells Marketing Daily.

“In the end, we were happy to see it all come together to be able to tell Heidi’s emotional and inspiring story,” she says.

During the Olympics, Liberty Mutual has had a team of community managers monitoring all social media conversations in real-time to quickly engage with consumers in a timely and relevant manner, Lebel says.

“This TV ad is a prime example of this type of real-time marketing being put into action,” she says. “Always on, social listening certainly provides opportunities for brands to be nimble in their marketing and to leverage emerging trends.”

The spot will air on NBC and its affiliates at least through the Closing Ceremony of the Games on Feb. 23.