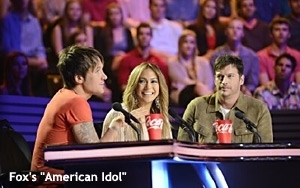 A funny thing happened this week on the season's first two live editions of Fox's “American Idol.” During the Tuesday and Wednesday two-hour shows, in which the top 15 girls (on Tuesday) and top 15 guys (on Wednesday) competed for a shot at being one of the Top 13 finalists (all of whom were revealed on Thursday's program), the visuals in occasional commercial breaks were reformatted in such a way as to encourage viewers not to look or click away during them.

Specifically, the screen during these breaks was sectioned into three parts: A large box sitting top left that featured an actual commercial, a brightly colored border that ran along the bottom of that box and up its right side with the logo of the advertiser (and sometimes the actual product) prominently displayed within it, and most interestingly, a smaller box at top right that offered a live feed from the “Idol” environs during the break.

It was an immediate eye-catcher, perhaps because it was something new -- but I think Fox is onto something here. For one thing, staring at the very prominent advertiser logos made as much of an impression on me as watching the commercial in the left box. I recall CBS' Leslie Moonves once telling me that he thought if advertiser logos were prominently displayed during commercials they would register with viewers who were watching recorded shows on their DVRs and speeding through commercial breaks. I think Fox last night proved him right.

Yes, there was a lot happening on the screen during the commercials in these two pods -- especially during the Coca-Cola spot, which at one point divided the box on the left into three boxes and the brightly colored border into two, resulting in six simultaneous images. But there was never any sense of clutter or confusion. Instead, everything about the advertisers' messages was excitingly enhanced. Coca-Cola actually entertained me for a few moments.

It might have been a lot to follow for old folks, but isn't stimulation from multiple sources the norm for Millennials when they are watching their many screens?

Overall, I think Fox created the most exciting environment for commercial showcasing that I have ever seen. As Coca-Cola and others demonstrated, there is much that an advertiser can do with this format to maximize its messages. If there was a drawback to this bold new presentation, it was that subsequent “traditional” commercial breaks in the show seemed drab and uninteresting by comparison.

At first I thought the live feed box thing would get old in about three seconds, but I was wrong. Consider what viewers saw in the two that were included in Wednesday's show.  In the first, they got to see all the hustle and bustle that takes place on the stage when the cameras are off during live competition shows. The judges were buffed and polished by hair and makeup artists. A stage hand busily swept contestant dander off the stage floor. (Or was he mopping contestant sweat? It was tough to tell.) Host Ryan Seacrest scampered over to chat with judges Keith Urban, Jennifer Lopez and Harry Connick Jr. Mentor Randy Jackson left his seat in the audience and came down to dish with them as well. Connick got up and stretched. Various producers and technicians dashed about. Urban diligently studied his notes. Words Seacrest would eventually speak flashed on the teleprompter behind the judges' table. Two cans of hairspray were emptied onto Lopez's head. (Okay, I'm exaggerating. But a note about that: The hairspray seemed to be of the aerosol variety. Seriously, the emissions from those two cans formed quite the cloud. I thought News Corp. was a green company. Shouldn't the “Idol” judge be spritzed or gelled rather than sprayed? Or was this naturally sourced aerosol? Just asking.)

In the second split-screen pod, Urban was busily texting someone, the hair and makeup people returned (this time paying special attention to every hair on Urban's head), Lopez took a long sip of something from a cup other than the one with the Coca-Cola logo in front of her, and Connick was showing something on his mobile device to Lopez. Then the action cut to the holding pen backstage where the guys who had not yet learned their fate nervously chatted, wiped the sweat from their faces, waved to the camera and moved about, hoping to be noticed. The action cut again to the guys and girls out front who had already been picked for the finals, looking as happy as can be.

If Fox doesn't stick with this new format I'm going to be disappointed. As someone who doesn't mind sitting through commercial pods during a live competition show, it was nice to see a network try to offer me something for my efforts. And it brought new life to the “Idol” experience, as well.