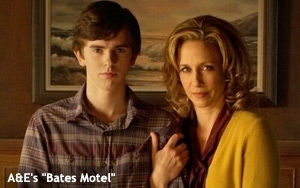 A&E this morning announced that it is getting into the live programming game. Next Monday, following the Season Two premiere of “Bates Motel” at 9 p.m. and the series premiere of “Those Who Kill” at 10, the network will present “Bates Motel: After Hours,” a live half-hour program at 11 p.m. featuring the stars and executive producers of the show talking about the new season and answering questions from fans.

I’ve been wondering which network would follow the lead of AMC in developing televised live after-shows that serve as companion programs to their most buzzed-about scripted series. AMC hit the bulls-eye with “Talking Dead” and “Talking Bad” -- hour-long live shows designed to hold the audiences for “The Walking Dead” and “Breaking Bad,” respectively. The creation of the two “Talking” shows was an incredibly shrewd move by AMC, which identified “Walking Dead” as a program that left viewers all worked up about something they had just seen and eager to express themselves and see and learn more. When “Talking Dead” clicked, “Talking Bad” followed.

Yes, social media addresses those needs for self-expression. But there’s something about seeing the people who are actually involved in the making of a series appear on live television immediately following individual episodes and talk about them. Also, social media is incorporated into these shows, which should leave everyone happy.

Just last night, I was thinking how great it was to see “Talking Dead” host Chris Hardwick appear on my screen right after a particularly tense episode of “Walking Dead” had ended. I can’t say I watched the full hour of “Talking” that followed, but I stayed with it for a while. (If there’s a drawback to “Talking Dead,” it’s the fact that some of its guests -- like Mindy Kalin on last night’s show -- aren’t associated with “Walking Dead” or genre fandom. Sometimes they click, sometimes they don’t.)

Anyway, “Bates Motel: After Hours” (a great title) is not an ongoing series, but it sounds like it should be. With the exceptions of FX’s “Sons of Anarchy” (which experimented this past season with a live online after-show) and MTV’s “Teen Wolf” (which has a companion televised talk series titled “Wolf Watch” that is not live) I can’t think of another scripted series on television that more excitedly lends itself to conversation of some kind after each episode.

Of course, if “BM: AH” is a success next Monday and A&E decides to scramble and keep it going, it will have to overcome the potential ratings-dampening obstacle of its time period. It’s not that 11 p.m. is necessarily too late a time slot. The problem is that another show -- A&E’s gritty and harrowing new detective drama “Those Who Kill” -- has been scheduled directly after “Bates Hotel,” which bumps “BM:AH” by an hour.

But this is a happy problem for A&E to have. Why, if “Those Who Kill” is a success, there is no reason why the network can’t stick with a weekly live 11 p.m. show on which guests talk about both “Bates Motel” and “Those Who Kill.” I’m talking off the top of my head about all of this, but I believe these are the kinds of new approaches to programming and promotion that every television network will need to consider as the competition for audience engagement grows ever more intense. (I also think these shows could loosen up a bit and be utilized to promote other original shows on their networks, as long as they don’t overdo it.)

I can’t wait to hear what “Bates Motel” executive producers Carlton Cuse and Kerry Ehrin and series stars Vera Farmiga and Freddie Highmore have to say about their show when they appear on “Bates Motel: After Hours.” I haven’t stopped thinking about this dark and twisty series since the end of its first season back in May. I just watched the first episode of the new season and have been pulled in all over again.

I find the “Bates Motel” experience and my response to it to be particularly interesting. Throughout Season One I thought the show was a fascinating and schizophrenic mess -- a blend of wacky, horrifying and heart-wrenching story lines and complex performances that accommodated all of its narrative tones. They sometimes stumbled over each other, but every story and every performance consistently surprised me in one way or another. Through it all, the characters got under my skin and stayed there.

Vera Farmiga as a fantastically off-kilter single mother trying to care for her son while operating a rundown motel and Freddie Highmore as the similarly unbalanced object of her smothering affections are delivering two of the best performances by any actors on any current television series. Highmore, in particular, has been a revelation with a largely internalized portrayal of a tormented teenager the likes of which I have never seen. That’s really saying something in this golden age of drama series.

Anyway, I’m glad A&E has found a way to extend the fun of “Bates Motel,” if only for one night. We can always hope for more.