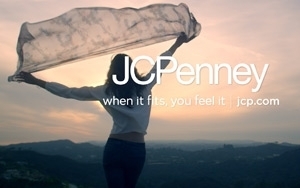 JCPenney is again using the Academy Awards to introduce a new spring marketing campaign. And given the dramatic maelstrom the company has starred in during the last few years, the new spots may earn it some kudos for “Best performance from a retailer.”

Themed “When it fits, you feel it,” the new effort continues the direction the company hinted at with “Rise,” which it broke during the recent Winter Olympics. Created by Doner and shot in a documentary style, the ads show women in fresh new fashions, and will likely make news for its casting: The ads contain a wide variety in women, in terms of age, size, body type and ethnicity.

“From a branding perspective, our new tagline celebrates the emotion that comes from finding the perfect fit, underscoring our commitment to deliver the sizes, brands, styles and prices that fit the real life needs of our customers,” a spokesperson for JCPenney tells Marketing Daily.

The new work comes at a time when JCPenney marketing has played more roles than actress Amy Adams. Beginning with the hiring of former Apple exec Ron Johnson as CEO in 2011, the company’s marketing messages have whipsawed. It announced its intention to abandon sales and promotions entirely with “fair and square pricing,” a concept that was introduced in ads starring Ellen DeGeneres, who is hosting this year’s awards show. Then there was the campaign apologizing for fair and square pricing. And in the months since Johnson’s ouster, the company’s marketing emphasis has moved back to emphasizing the chain’s frequent -- and steep -- discounting.

And while these are purely branded spots, the spokesperson says such messages will account for only about 3% of its marketing efforts going forward. She points to a recent Valentine’s Day ad touting 20, 40 and 60% off discounts along with the new tagline, as an example.

“As we focus on reconnecting with our core customer, our new marketing showcases our commitment to catering to the needs of our customers,” she says. “We had lost track of who we are and the wishes of the customers we serve. Through our new marketing, we are bringing decades of relevance into a present proposition that matters, highlighting what have always been good at -- fitting the diversity of America’s shapes, color and wallets.”

It may be working already. The company is due to release quarterly earnings this week. And a tweet from Deborah Weinswig, now chief customer officer at Profitect and a former Citi analyst who follows JCPenney, hints they could be encouraging. “Don’t write JCP off yet. With Ullman+Sadove=reconnection to consumers wallets might be sooner than everyone thinks.” (Myron Ullman is the company’s current chairman, and Stephen Sadove, formerly CEO of Saks, is now on Penney’s board.)

This marks the retailer’s 13th consecutive year as the exclusive retail sponsor for the Oscars. “Known as the Super Bowl for women, it is the single-largest platform for our target customer,” says the spokesperson -- reaching 40 million viewers last year. She adds that because the event is most often watched live, it’s a key “second screen” event, with great potential for both social media and e-commerce options. Last year, the company launched its Joe Fresh line during the broadcast.

The six different ads, created by Doner, will run throughout Oscar weekend, including on E!’s red carpet special, which she calls “a key component to the Academy Awards experience.”