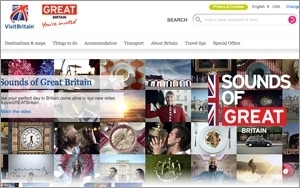 The British are coming -- via a new tourism campaign -- and they want you to visit Stonehenge and other places outside of well-trafficked London.

VisitBritain, the tourism board of England, Scotland and Wales, and ad agency Rainey Kelly Campbell Roalfe/Y&R are launching the "Sounds of GREAT Britain," an interactive global campaign to highlight the region's diverse destinations.

"There's this perceived reality in the U.S. of the familiarity of London, but not necessarily of whole Britain," says Karen Clarkson, VP, North America, VisitBritain. "This campaign was inspired by our interest to showcase the other destinations that capture the essence of British culture and character."

The $4.1 million campaign promotes familiar and iconic locations by enabling users to develop their own personalized itineraries. The VisitBritain Web site showcases "suitcases" of things to do while visiting the region, including tours of Wimbledon, Shakespeare's Globe Theater, Stonehenge and Arthur's Seat in Edinburgh.

"We wanted to go beyond the TV spot or brand film to develop engaging content," says Clarkson. Thus, the "LoveWall" tool on the VisitBritain Web site allows users to select and group their favorite destinations in a way that can be shared via Facebook and Twitter. At the same time, this interactive online component is supported by traditional TV spots, which show images of popular UK places backed by the song “Feel The Love” by the British band Rudimental.

Although this campaign is designed to inspire travel, the next element of the initiative will encourage actual conversion. VisitBritain is working with travel partners to develop booking platforms so users can plan itineraries and then seamlessly make official travel arrangements, says Clarkson.

Until then, the focus is rolling out this campaign globally. It launched in North America last week and will be introduced in Brazil, China, India, and Europe in the coming weeks.

Britain continues to be a popular travel destination. In 2007, the region saw some 32 million visitors; last year, Britain experienced a record-breaking 33 million visitors "We have been on an upward track with the [2012] London Olympics and Queen's Diamond Jubilee. We think this year will be another bumper year," says Clarkson. "We have enough room."