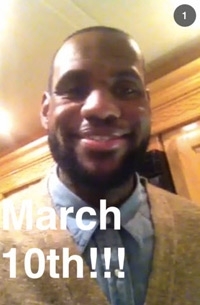 McDonald's is one of a growing number of brands that have jumped into experimenting with Snapchat — the Millennials' social favorite where the images and videos normally disappear after 10 seconds — particularly since Snapshot debuted its "stories" format last October.

That format allows for telling stories by publishing a series of clips and images, which can be viewed for up to 24 hours.

McDonald's used behind-the-scenes clips and images from a shoot done for a TV ad, part of its launch campaign for a Bacon Clubhouse sandwich.  (The sandwich made an appearance near the end of McD's' Snapchat story.)

Rival QSR Taco Bell got a jump in using Snapchat. Last May, it promoted the reintroduction of its Beefy Crunch Burrito, in that case using the standard format of sending snaps to individual users.

And Taco Bell has been using stories, as well since the launch of that option, which lets users send images and clips to all Snapshot users, or just to friends or a specific list. Stories appear next to friends' handles (McDonald's username is, not surprisingly, mcdonalds.

Other brands that have joined Snapchat of late include Juicy Couture, Seventeen magazine, NPR and HBO's "Girls."

Rick Wion, director of social media for McDonald's, told Mashable that the QSR had gotten several thousand followers within a few days of teasing its new account on Feb. 21 – a good sign for the platform's potential long-term viability as a marketing tool for the brand.

"We are excited to use Snapchat as a way to share the fun side of our brand with this highly engaged audience of Millennials," he said, noting that the plan is to share images both from "red carpet events" and "quirky everyday moments."