Mustang Gets 'Need For Speed' 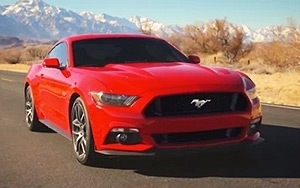 Scott Waugh, the director of the upcoming action film “Need For Speed,” is helming a spot for the 2015 Ford Mustang. The ad, which also touts the movie and notes that the car is its star vehicle (literally), debuted during the Daytona 500 on Sunday.

The spot uses video clips from the film so that one sees the main character Toby Marshall, played by Aaron Paul, getting arrested, jailed and then in a red Mustang racing across the desert. Voiceover says, “Do you really think that if you’ve been set up, accused and convicted, a new car can put it all behind you? Depends on the car!”

The film, which is a filmic extension of the EA game of the same name, is about a guy zooming around the country chasing the guy who killed his friend. The cross-promotional campaign includes a social media element (#InaMustang) where people can upload video, photos and text about where they would go in a Pony car if they could go anywhere. Ford says it will take the stories, which people can upload to InaMustang.com, and turn the best into a movie, via partnerships with content mavens in social and film networks.

The “Need for Speed” feature film, produced by DreamWorks Studios, is set to open in nationwide on March 14. The TV spot, in addition to running on national TV rotation, is also running in theaters.

Ford has also been touting the 50th anniversary of the car with a number of programs, including a video-series Web site, Mustang Countdown, that offers historical, cultural and global points of reference. The program leads up to the official 50th birthday of Mustang on April 17 this year.

The video series begins with a review of the first car in 1962 and delves into Mustang toys, the extensive history of offshoots, customized versions, star turns, rare footage, with interviews with major players and pundits.

The 2015 Mustang is also Ford’s first version of the car designed as a global vehicle, which explains some aspects of the design change making the car sleeker, more European looking. Ford did a global reveal of the car simultaneously in five time zones. For Europe, the automaker launched creative that was shot by fashion photographer Rankin and stars Sienna Miller, who says, “I do love an American accent.”